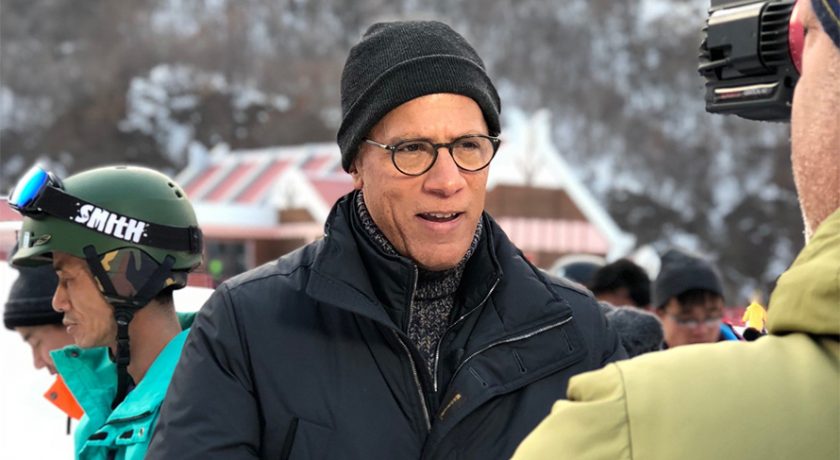 It’s been quite a busy start to 2018 for NBC Nightly News and Dateline NBC anchor Lester Holt. He reported from North Korea the weekend before last, he’s in Washington today covering Pres. Trump’s first State of the Union, and he’s traveling to Minneapolis later this week to anchor Nightly News from the site of Super Bowl LII, which takes place Sunday. NBC has broadcast rights to the Big Game this year, and this will be Holt’s first Super Bowl.

After the Patriots-Eagles showdown, it’s back to the Korean Peninsula to anchor Nightly News from Pyeongchang, South Korea, site of the XXIII Olympic Winter Games. (Holt’s ninth)

We chatted with Holt for a story tied to Adweek’s Super Bowl issue, which hit newsstands yesterday. Here’s the extended version of that Q&A, which took place Jan. 17:

Adweek: NBC Nightly News attracts 8-9 million viewers every weeknight, and is No. 1 in A25-54. Ratings are down a bit from previous years, but you’re still getting a ton of viewers. How are you and your team making sure that newscast remains a relevant part of someone’s day, especially considering they might have been spending their day surfing Twitter and Facebook?

Holt: I think the formula is very simple. It’s about original content. That’s our focus. The other night, we sat down with three top Silicon Valley executives who really opened up about Facebook and Facebook’s failures that led to them being used in the 2016 election by foreign interests. That’s the kind of stuff we’re really emphasizing. That said, we understand the changes. With smart phones, the minute we wake up we’re getting news in a variety of ways. But people really deserve to sit down in the evening and get some understanding of the big events of the day. But also some original reporting, and that has been our emphasis. We have built up our political units, our investigative units, our health units, business units, and they’re turning fresh stories every day that help us stand out in the crowd.

So how do you do all of this considering you have 22 minutes?

It’s not easy. It leads to “spirited” conversations among the senior folks here. I always talk about that when I started in the business, we had a 24-hour news cycle. Now, maybe it’s a two-hour news cycle. Things turn so quickly, and it’s a constant balance of: “What do you lead with?” “What are the important stories of the day?” “What have people not heard a lot about?” “What story has been battered back and forth on cable all day?” There’s no single answer, because it’s more difficult than it has ever been because of the speed at which things happen, and how people receive their news.

How do you define the role of the journalist in the age of Trump? Presidents don’t love the press, but I don’t recall any being as publicly antagonistic towards the Fourth Estate as this one is.

You hear the term “fact checking” right now more than you ever have, but fact checking has been a basic part of reporting for as long as people have been reporting, so we do that. I think this administration challenges us a bit more on that level, fact checking and trying to put things in perspective. We strive to help our viewers understand the differences between issues. I mean true political issues, in which there are clear differences, and then some things that are simply just unusual. We can’t sit back and allow some things to be normalized. They have to be called out. They have to be reported on. I think in many ways, this era has sharpened all of us. My feelings aren’t hurt by being attacked. It’s disappointing to feel low blows from high places, but the fact of the matter is I work for a broadcast that has a 70 year legacy, and you can’t insult away the integrity, the history, and the tradition that we have put together.

The NFL has been politicized by Pres. Trump and Vice Pres. Pence this season. They have publicly expressed displeasure with some players deciding to kneel during the national anthem. Is this something you will address during your Super Bowl nightly newscasts? Do you think you’ll be able to have players/experts come on to speak about it?

We don’t want to finalize plans until we’re closer, but clearly the NFL is a major news story, not only because of the anthem protests, but also because of controversy behind concussion protocol, which is a major issue that continues to hover over this American sport. We’re also in a great position because NBC is carrying the Super Bowl this year, and everything is coming together nicely. We will have access and those will be among the stories we will be telling.

Speaking of Pres. Trump, a news anchor from the network that broadcasts the game typically has the chance to interview the president. TVNewser reached out to White House two weeks ago to ask if Pres. Trump will sit down with NBC News. We haven’t heard back. Have you asked? Are you hopeful that it will happen?

Without getting into specifics, there have been communications between NBC and the White House about a conversation format, the timing, the location, and those sorts of things. We have not come to any agreement yet. I think it’s always a great opportunity. The president has not done a lot of interviews recently with mainstream news organizations, so obviously it would be a great opportunity, and we welcome it should it come.

This will be the ninth NBC Olympics for you. There’s no unified Russian team due to the doping scandal, and there’s the political angle – tensions between the U.S., Russia and North Korea. How are you able to link all of these events together, while still keeping your eye on the actual Olympic competitions?

Every Olympics seems to have a major news story in the background. In Rio, it was Zika. In Sochi, it was Chechen terrorists. Thankfully, none of those things came to pass. This one is evolving as we speak. I think if you asked me the question a month ago, we would have said: “What will Kim Jong-un do?” We need to keep in mind this isn’t far from the Korean Demilitarized Zone. Now, that conversation is shifting before our eyes now as the two Koreas have agreed to carry a joint flag. They’ll field a joint women’s hockey team. There’s something happening on this level of sports. The world is holding its breath on the issue of: “Is this the breakthrough? Is this the moment when they can start having a useful dialogue?” We are in a unique place to cover that story as it unfolds before our eyes. On a geopolitical level, this may complicate how the White House views the North Korean nuclear threat if this sets a pattern for a stronger relationship between the North and South.

Will you try to get a sit-down with  Vice Pres. Pence in Pyeongchang? How about South Korean Pres. Moon Jae-in?

Sexual harassment has become a major news story. I know the people who cover the news don’t want to be the news. As a newsman, how do you navigate this particular issue? You’ve known some of these people for a while, Charlie Rose, and of course Matt Lauer.

It’s a news story, and while it’s tough because you might know the people, at the end of the day we’re journalists and covering the story is what we do. I always remind people that news sometimes hits closer to home than you like, sometimes it challenges your senses. But these stories certainly need to be told, and I think that we as well as our friends at CBS have dealt with these issues in much the same way, and that’s what we’ll continue to do.

Talk about your football fandom.

First, I was an L.A. Rams fan. Roman Gabriel was a favorite player of mine. Then as I grew up and moved to San Francisco, I became a 49ers fan. I cheered for the Bears when I worked in Chicago, and now I vacillate between the Giants and the Jets. But throughout, the 49ers have remained my team. They have had a tough time lately, but I like to think back to the glory days with Steve Young and Joe Montana.

Who will win on Sunday?

I would just say that you can’t under estimate the advantage of having “been there.” And certainly the Patriots have been there.  Having no allegiance to either team I’d have to give the edge to New England.

Additionally, Holt appeared on The Tonight Show Starring Jimmy Fallon last night, talking State of the Union, the Olympics, his North Korea trip, and the birth of his first grandson. 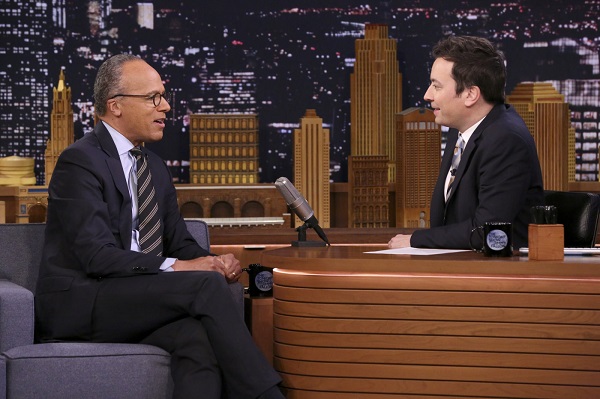