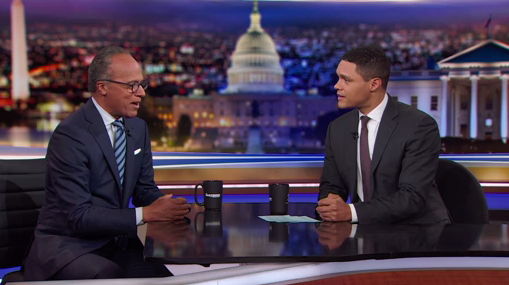 NBC Nightly News anchor Lester Holt appeared on The Daily Show with Trevor Noah yesterday to talk about reporting from the ground, doing the best he can do report the news objectively, shining a stronger light on criminal justice reform, as well as how he stays away from responding to his social media critics.

“That’s a fool hardy game as a journalist,” Holt says in response to the critics. “You can’t get into that because – we do news every day that sometimes makes people uncomfortable. We’ll do stories that may challenge your world view or challenge what you’ve always thought something to be and if you got into the position of –  responding to every critic of something you’ve reported that would take you down a road you don’t want to go down. And certainly I’m not going to get into it with the President of the United States.”

On reporting from the ground, Holt says that being a reporter by trade means he’s always more comfortable out in the field.

I always tell – young journalists – they say ‘I want to be an anchor someday,’ and I say ‘that’s great, but just so you know, the most exciting, fulfilling moments of my career have not been sitting at the desk. They’ve been out in the field.’ So I do take the broadcast out on the road to major stories – hurricanes, or attacks, or whatever may be going on, but it’s also important to go visit communities when nothing horrible is happening. I was in local news for twenty years and you know you have a community whether it was Los Angeles or Chicago, you know you had a community. I speak to the whole country every night and it’s important to – get out of New York City – I love it here, but some people describe it as a bubble – to get out look at stories that may resonate across the country but are playing out in a unique way in a particular city.”

This weekend, Holt, a 49ers fan, will be joining NBC’s Football Night in America broadcast, and the Sunday Night Football Halftime Show from Houston to promote Nightly News’ Across America series, which commences the following evening in Houston. During Holt’s appearance, he’ll be discussing the region’s recovery from Hurricane Harvey, which he covered first hand last year.