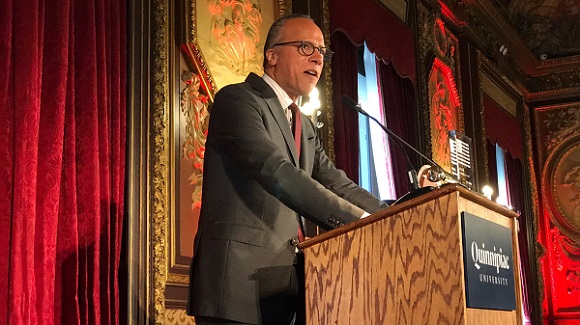 Another day, another honor for NBC Nightly News and Dateline anchor Lester Holt. Fresh off receiving the prestigious Fred Friendly First Amendment Award at a luncheon earlier this week, the Radio Television Digital News Association (RTDNA) announced that Holt is winner of the 2017 Paul White Award, “which recognizes a lifetime of achievement and service to the profession of electronic journalism.”

Holt will formally receive the award on Friday, September 8 at Excellence in Journalism 2017 event, at the Anaheim Marriott in California.

“At a time when journalism has faced unprecedented challenges, Lester Holt remains a trusted and steady voice,” said Vincent Duffy, chair of RTDNA. “We’re proud to recognize his work, his decades of dedication to our profession and his commitment to seeking and speaking the truth.”