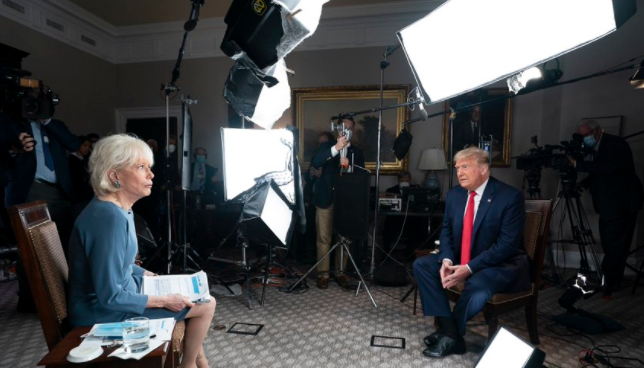 Lesley Stahl and her longtime producer on 60 Minutes Rich Bonin spoke with TVNewser for our latest The Producer I Can’t Live Without installment. The duo have collaborated on hundreds of stories over their 26-plus seasons together, but Stahl’s sit-down with former President Donald Trump last October stands out. “It’s not necessarily our very best story, but it’s probably going be our most memorable,” Stahl told TVNewser last week. “He walked out on us, and then he released the entire interview before we went on the air.”

Stahl and Bonin tell us the story behind Trump’s infamous interview walk-out:

TVNewser: Lesley, how did you feel when the infamous “walk-out” happened?

Stahl: I was bemused because I didn’t know why he [Trump] got up and left. He did not seem angry. He just said, “Okay, I think you guys have enough,” and got up. There was no storming out. In fact, he said to me, “I’ll see you later.” We had planned to do a walk-around outside the White House and he seemed to suggest we were going to do that. I was just baffled. 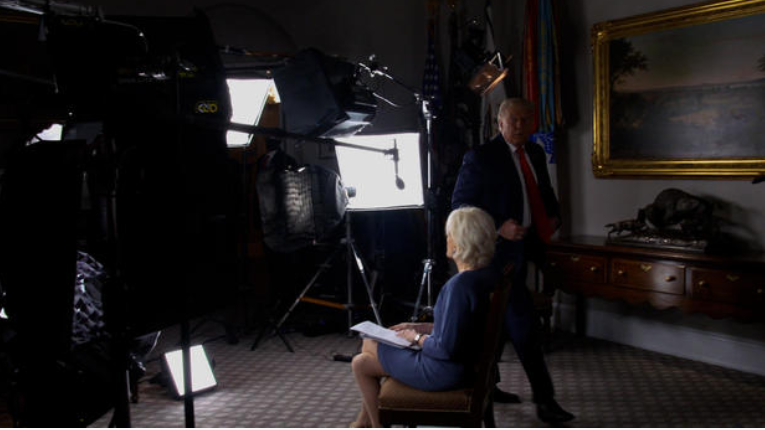 Bonin: I had a different read. We had interviewed him three times before that, and he loved the verbal jousting with Lesley and always looked forward to it. There was an element of behind-the-scenes fun before things got rolling and the jousting started. This time, he seemed to arrive at the interview, we’re in the Roosevelt Room, he seemed to be in a bit of a bad mood when he arrived. I sort of felt it in the air.

The other thing that was important to me was that we determined editorially, as a team, that we had not only the duty to hold him accountable for what he had done as president as we would anyone sitting in the Oval Office, as Lesley has done in her many interviews with presidents, but that we were not going to let made-up things, lies go on the air. We thought about how we would handle that, and we all talked about it, agreed on it. But it was Lesley who was in the hot seat and who had to do it in real-time. Our respect for the office of the presidency, and you’re sitting there – it wasn’t easy. He walked out because Lesley was doing that, and I thought no matter what came of this piece, we lived up to our responsibility. I was proud of that.

Stahl: Thank you very much. I remember that you, Rich, Bill Owens, our boss, the executive producer, was with us in the Roosevelt Room. We were all just shocked. We walked back to the hotel, which was across Lafayette Park, and we didn’t know what we were going to do in the piece. I didn’t get off a lot of my questions that we felt were important to be asking at that point. We were we were a little bit …

Bonin: … Nonplussed. As a producer one-step removed, Lesley’s in the ring and I’m the corner man. I could see that we had a piece. There was no doubt about that. I don’t think any president of the United States has ever walked out of an interview before. That was new territory. Then, they told us they were going to videotape us videotaping the interview for “White House archival purposes,” and the next thing you know, they’re releasing it three days before our Sunday broadcast. It was all a strange experience.

Stahl: We’re under Covid rules. We have come together to work in the same room for the first time in at least a year by that point. We’re all wearing masks, and we’re in this giant room separated, but working together. Our boss calls and says they’re going to put out the interview before us. Rich and I were working on deadline to get the story on the air, trying not to be sidelined by this because whether they did that or not, we still had to finish the piece we had to go through the interview and pick out what we wanted to put on the air and what we could go without because we had interviewed him, even though he walked out, much longer than the allotted time we had.

So, the two of us were sitting in this room together. The editor was on Zoom on Long Island. We’re in Manhattan. Our boss is somewhere else communicating with us about the White House was dealing with him. We just had to put our heads down and keep going. I have to say that Rich and I, despite the fact that we argue, we didn’t argue over that story. We don’t argue when we’re under deadline pressure, actually. We just had to keep moving along with the story and try not to allow this little drama to distract us and get this story done.

It was a “crash” by 60 Minutes standards.

Bonin: Because of the Covid logistics, we had to have a have a script by the end of Friday. Meanwhile, President Trump is tweeting out attacks against Lesley and 60 Minutes. The White House Chief of Staff is playing hardball with the executive producer, Bill Owens. The raw interview is released, and our competitors are going to excerpt it and scoop us. We just had to block all of that out and deal with the task at hand. Bill Owens, to his credit, and [then-CBS News president] Susan Zirinsky, both insulated us from that drama so we could focus on the story.