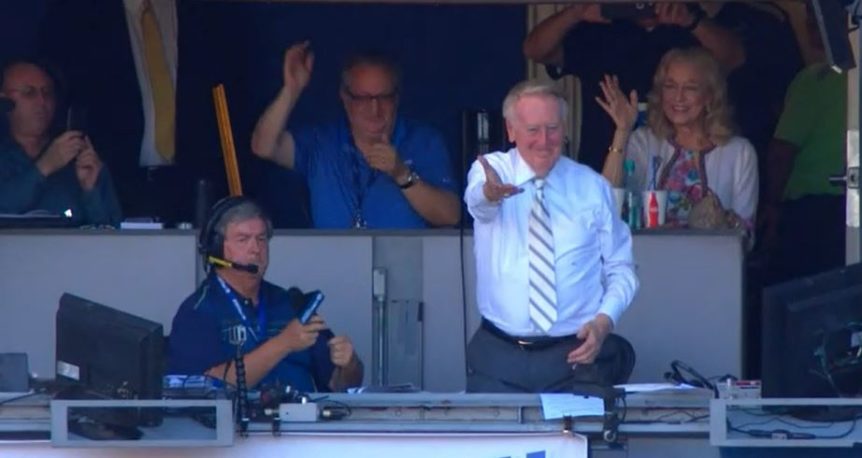 He was named Top Sportscaster of the Century back in 2009, but to many, it was personal; he was their top sportscaster. Vin Scully died Tuesday night at the age of 94.

The news of Scully’s passing came from a tweet posted by the Los Angeles Dodgers organization, for whom Scully called games for 67 years, starting when the baseball team still played in Brooklyn, until his retirement after the 2016 regular season.

The games he called were not only classics, but cultural milestones. His voice was heard on television when Hank Aaron broke the Major Baseball home run record in 1974 with his 715th home run.

“A Black man is getting a standing ovation in the Deep South for breaking a record of an all-time baseball idol,” Scully told listeners. “What a marvelous moment for baseball.”

Scully’s voice did not just resonate within Southern California. It boomed across the country as he called nationally-televised sporting events for CBS and NBC.

Scully was present during football and golf seasons. NFL fans, for instance, will link him to “The Catch,” the call that he made during the 1981 NFC Championship when what was supposed to be a Dallas Cowboys victory improbably turned into a loss after San Francisco 49ers wide receiver Dwight Clark came down with the game-winning touchdown pass thrown by Joe Montana.

Tributes to Scully came from all areas, far and wide.

The story of Los Angeles cannot be told without the voice of Vin Scully. He will be forever missed. pic.twitter.com/D32WVCa9Jh

The Houston Astros join the rest of the baseball world in mourning the sad passing of legendary Dodgers broadcaster Vin Scully. pic.twitter.com/6D8xRxMZE9

We are remembering the legendary Vin Scully. @jacobsoboroff is sharing what he meant for the game of baseball. pic.twitter.com/7wXrPjRPC2

RIP Vin Scully. 🎙 The greatest broadcaster ever and the voice of one of the most iconic calls in our history. pic.twitter.com/6B6bilKbrW

The man who was at the mic in the 1981 NFC Championship Game for “The Catch” was….Vin Scully. pic.twitter.com/NQFVzG4CbE

We mourn the passing of legendary @Dodgers broadcaster Vin Scully. He was 94. https://t.co/L0pIR7j5mg pic.twitter.com/hZBzW4Z1WH

What’s so remarkable about Bill Russell and Vin Scully is how many generations they impacted. Been struck by how many decades each man continued to reach those who watched and listened and learned. Lives lived in such exceptional fashion.

“The game of baseball has a handful of signature sounds. You hear the crack of the bat. You got the crowd singing in the seventh inning stretch, and you’ve got the voice of Vin Scully.”