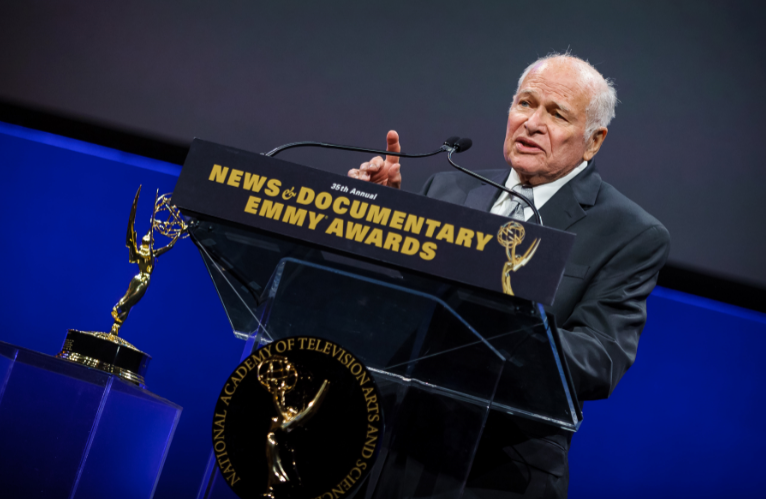 Small is best known as chairman of the News and Documentary Emmy Awards, for his 17 years at CBS News, his three-year run as president of NBC News and later United Press International.

He retired in 2010 after 10 years as chairman of the National Academy of Television Arts and Sciences. NATAS honored him with its Lifetime Achievement Award at the annual News and Documentary Emmy gala in September 2014.

Small is remembered by many for his leadership of the CBS Washington Bureau from 1962 to 1974—a period when Americans turned to the network for coverage of the civil rights movement, the Vietnam War and Watergate. Small compiled a corps of reporters and correspondents that helped boost the CBS Evening News with Walter Cronkite to No. 1, beginning in the 1967-’68 season. CBS Evening News held on to the No. 1 ranking through the tenure of anchor Dan Rather to the 1988-’89 season.

“Bill Small was a hero to journalism,” Zirinsky said in a statement Sunday. “He hired me as a 20-year-old to work the weekend desk in the Washington Bureau two weeks after the Watergate break-in. He was tough as nails when it came to defending freedom of the press. He was strict, strong and full of conviction. But the man had a heart of gold—which he only revealed one-third of the time. His daughter, Tamar Small, reminded me tonight that Bill always said, ‘The Washington Bureau and the entire CBS News Division make up an organization that remains the pinnacle of journalistic integrity.’ Every one of us carries Bill Small’s legacy with us—it’s the core to who we are as journalists.”

Stahl said of him, “He was heroic and steadfast, especially during Watergate, when it seemed we were getting angry calls from the White House every night. It got intense. … He made us want to be better—and nobody wanted to disappoint him.”

Schieffer said of him, “What I came to understand about Mr. Small was that when he became bureau chief, he took responsibility for the bureau—its mission and its people, which is what real leaders do.”

Of special note, Small helped orchestrate a broadcasting first: Ask President Carter, a call-in radio special hosted by Cronkite that was the first time Americans could speak to a president on air.

Before arriving at the national level, Small fostered a notable career in local news, developing CBS affiliate WHAS-TV in Louisville, Ky., into a powerhouse station. He left WHAS for CBS News in 1962, beginning his career at the network level as an assistant news director in the CBS Washington Bureau.