NEXT:Wednesday, July 22 Scoreboard: Last Night's Broadcast of Hannity Drew 4.3 Million Viewers, No. 1 on All of TV
PREVIOUS:ABC News Live Will Launch Live Programming in Daytime Focused on 'International and Business News and Expanded Reporting From GMA' 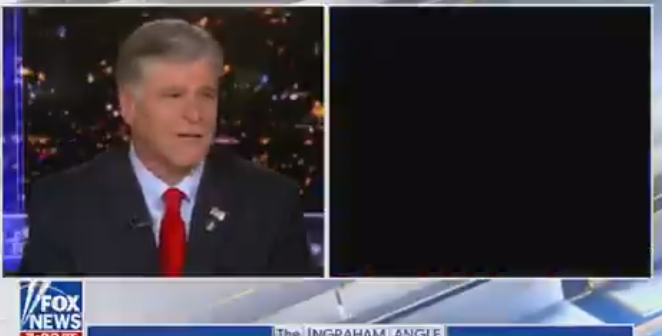 There have been some bumpy handoffs during Fox News prime time this week.

First, there was Tucker Carlson seeming to take umbrage with a remark Sean Hannity made during the 8 to 9 p.m. transition on Tuesday (Hannity tried to clean it up on Twitter shortly thereafter), and last night there were technical difficulties between Hannity and The Ingraham Angle.

No contentiousness in this case. If anything, it was sort of amusing (OK, maybe not for the folks working hard behind the scenes).

During the handoff, Laura Ingraham‘s feed suddenly cut out and viewers saw a big black hole on the screen. Viewers could hear a producer off screen whispering to Hannity, “Keep talking, keep talking,” and the 9 p.m. host, breaking his look into the camera, then nodded and began to wing it as Ingraham’s image completely disappeared (see top right).

“OK, I guess it’s frozen. I’m still on the air, is that what you’re telling me?” said Hannity. “Hi, everybody! Alright, well, I’m on the air. Apparently we lost Laura’s signal, which is fine with me because I’m a talk show host and I never shut up.”

At that last quip, someone off-screen could be heard laughing.

Hannity then went back to points he was making at the top of his show, when roughly a minute later, Ingraham finally reappeared in the split screen, but Hannity, apparently unaware, drove right on as his colleague awkwardly sat on screen waiting for him to finish his thought.

Hannity responded, smiling, “Oh, you could say thank you for bailing me out. I wanted to finish my monologue but, I can talk forever. Here is the problem. I think when I was complaining about you coming and hitting the post on time, it was like … You giving me an MSDNC conspiracy theory?”

“It was a surge, a power surge, I kid you not,” Ingraham said. “No, no, no I have people knocking over lights, I have people crawling on the floor and, I should really turn the camera around. I have the dog going in and out.”

“But I literally thought you were playing some practical joke on me,” said Ingraham.

An amused Hannity could be seen crumpling up a piece of paper and launching it at the camera.

“Sean, I kept talking into the camera, I was talking and then I was, like, wait a second, nothing’s happening!” said Ingraham.