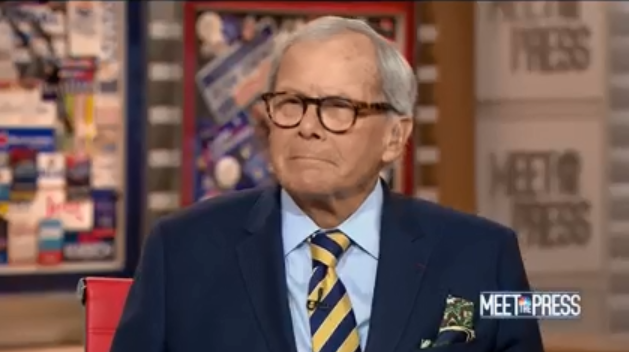 It seems Tom Brokaw’s Twitter apology for stating on last week’s edition of Meet the Press that Latinos should “work harder at assimilation” into American culture isn’t sufficient enough for everyone.

On Monday, a union of Hispanic community advocates wrote a letter to NBC demanding more than just a social media apology from the 78-year-old NBC News special correspondent.

“Mr. Brokaw’s comments are more than just out-of-touch musings,” they’re “part of a legacy of anti-Latino sentiment that is spreading freely in 2019,” the letter said.

The groups also called on NBC to improve the diversity of bookings on Meet the Press with Chuck Todd, which is currently the top-rated Sunday show.

The groups are also pushing for the network to make a “significant” donation to the National Association of Hispanic Journalists; and produce a series about the Hispanic community in the United States.

Mr. Brokaw, Meet the Press and the network take actions to better educate themselves about the diversity of the fastest growing demographic in the country, including putting resources behind a series that highlights the diverse and complicated history and contributions of the community in the U.S.

For a man who claims to be a storyteller of American history, Brokaw’s comments did nothing more than repeat the ugly history of racist and xenophobic tropes that nearly every immigrant or ethnic group has had to endure.

NBC News has faced an increasing backlash from comments made by the legendary TV newser over the past 24+ hours: “Tom’s comments were inaccurate and inappropriate and we’re glad he apologized,” an NBC spokesperson told TVNewser Tuesday morning.

What exactly did he say?

“The fact is, on the Republican side, a lot of people see the rise of an extraordinary, important, new constituent in American politics: Hispanics, who will come here and all be Democrats,” Brokaw remarked during a discussion “Also, I hear, when I push people a little harder, ‘Well, I don’t know whether I want brown grandbabies.’ I mean, that’s also a part of it. It’s the intermarriage that is going on and the cultures that are conflicting with each other.”

He later remarked: “I also happen to believe that the Hispanics should work harder at assimilation,” said Brokaw. “That’s one of the things I’ve been saying for a long time. You know, they ought not to be just codified in their communities but make sure that all their kids are learning to speak English, and that they feel comfortable in the communities. And that’s going to take outreach on both sides, frankly.”

This isn’t the first time Brokaw has told tales of encounters with folks from exurbs and rural areas, as noted by Washington Post’s Erik Wemple.

Last January, on MSNBC’s MTP Daily he remarked, “Well, I remember being in [a] small town of Wyoming this past fall. I was doing some reporting. There was a fellow out there,” said Brokaw. “And a woman came up to me on the street, a big Trump admirer. She said, the Russians, I know, yes, they’re probably involved. Why shouldn’t we think they were involved? But I don’t think it made any difference in the election. And walked away. I think a lot of people feel that way.”

Months before the 2016 general election, Brokaw did a story from Sioux Falls, S.D., not far from his native town of Webster, S.D. “Sioux Falls is a small city with a big reputation. It makes all the lists for quality of life and economic opportunity, but it has a problem. Unemployment is so low, just 2.1 percent, there aren’t enough workers, especially for the tough jobs,” reported Brokaw. In the report, an immigration attorney tells Brokaw that 36 languages are spoken in town. “What about assimilation? Are they fitting in?” asked Brokaw.

Disappointed @tombrokaw to see you were trying to get attention with misguided, erroneous, xenophobic comments. Surprised someone of your stature would say, let alone believe Latinos are not assimilated and/or acculturated. If you need some facts don’t hesitate to reach out to me https://t.co/Feq7apDIck

Here’s Brokaw’s Twitter apology, which appears to be a bit discombulated.

i’ve worked hard to knock down false stereo types. in my final comment in Meet i said ALL sides hv to work harder

at finding common ground – which i strongly believe
dialogue not division

my twitter acct failed me at the worst time.
i am sorry, truly sorry, my comments were offensive to
many. the great enduring american tradition of diversity is to be celebrated and cherished. yamiche, thank u for your comments.
let’s go forward together.

finally, i am sorry – i never intended to disparage any segment of our rich, diverse society which defines who we are.

great
Yamiche is a wonderful colleague and an important voice

i got your attention.