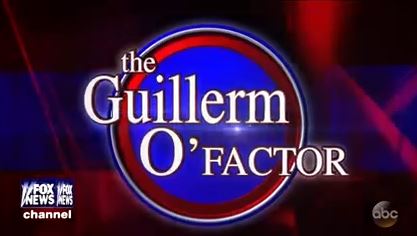 Tonight Show’s Jimmy Fallon led off his monologue with the story: “Experts say that it’s not likely that any self-respecting network will ever hire him, then CNN said, ‘welcome aboard.'”

The Daily Show’s Trevor Noah spent most of his first segment on it, calling Bill O’Reilly “the biggest figure in the history of cable news and no one even came close. Because they were afraid that he might sexually harass them.”

And Late Show’s Stephen Colbert, who spent 9 years playing a character based on O’Reilly, said O’Reilly disappearing from TV is “like looking at your front yard and the big oak tree is just gone. I’m sure the oak tree said some disturbing things about young black men, what with their rap and their neck tattoos, but damnit, that tree has been there forever. And your grandpa liked to just sit and stare at it. And then the tree would sell him gold coins and self-lubricating catheters.”