NEXT:Tuesday, Feb. 25 Scoreboard: Laura Ingraham Was No. 1 in Prime Time
PREVIOUS:CNN's Nima Elbagir Is Named Television Journalist of the Year by the Royal Television Society 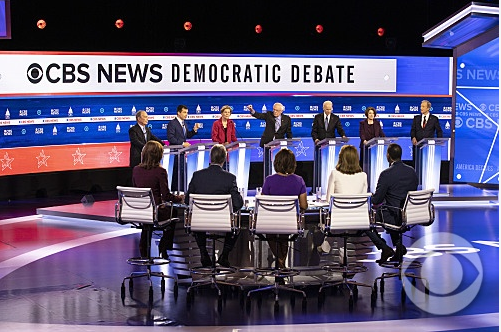 The 2020 CBS Democratic primary debate in South Carolina may have received poor reviews on social media, but at least the ratings were good!

Last night’s debate, which represented the final face off for the candidates before the South Carolina primary and Super Tuesday, was watched by 15.34 million viewers across CBS, and ViacomCBS siblings BET and BET Her from 8-10 p.m. ET.

Additionally, the post-debate program on CBS, produced by CBSN, delivered 5.6 million viewers, with 1.4 million of them Adults 25-54.

With its 14.8 million total viewer delivery, CBS can technically lay claim to having the largest primary debate audience of any one network of the current cycle so far.

That being said, the NBC News debate in Nevada, which took place just last week, delivered 19.7 million total TV viewers, making it the most-watched Democratic primary debate of all time.

NBC-MSNBC-Telemundo can also lay claim to having the 2nd-largest overall primary debate audience of the 2020 cycle, with 18.1 million viewers tuning into the second night of the first Democratic primary debate, which took place last June in Miami.

Coming up, the 11th Democratic primary debate of the 2020 election cycle will take place March 15 in Phoenix. CNN and Univision will serve as co-hosts.

The date, venue and additional details for the 12th and final scheduled debate have yet to be made public by the DNC.