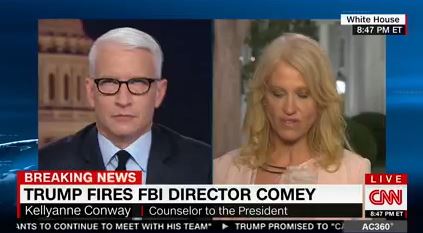 Counselor to the President Kellyanne Conway said Anderson Cooper rolling his eyes during an interview with her Tuesday night was sexist.

“Can you imagine rolling your eyes, having a male anchor on a network roll eyes at Hillary Clinton, at somebody, a female representative spokeswoman for President Obama or President Bill Clinton? I think not,” Conway said on Fox & Friends this morning.

“He had me sit through a bunch of tapes showing then candidate Trump commending Jim Comey about Hillary Clinton’s emails, talking about him etc. and the fact is that they showed all these clips and it showed candidate Trump in Grand Rapids Michigan and I said ‘hey, thanks for the trip down memory lane,'” Conway recalled.

Cooper rolled his eyes when Conway tried to make the point that candidate Trump praising Comey, and Pres. Trump firing him, can co-exist.

“I face sexism a lot of times when I show up for interviews like that,” Conway said.