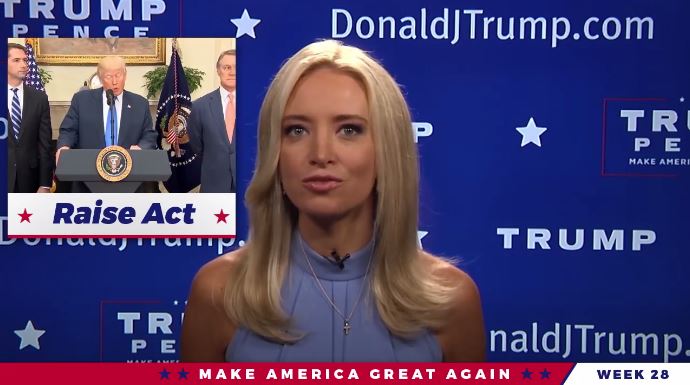 Remember all the talk about Donald Trump launching his own news network after he lost the election?

Well, he won the election, and he’s still gone ahead with Trump TV, with short, hosted clips which tout his accomplishments.

On Saturday morning, longtime CNN political commentator Kayleigh McEnany announced she was moving on from CNN. 24 hours later she turned up on Trump’s Facebook page with the first installment of Pres. Trump TV.

While I have enjoyed my time at CNN, I will be moving to a new role. Stay tuned next week!

In the :90 video, McEnany highlights economic and jobs growth: “Pres. Trump has clearly steered the economy back in the right direction;” his immigration reform plan: “Pres. Trump is finally putting the American worker first;” and a plan to reform veterans’ care: “Pres. Trump is dedicated to honoring these men and women who fought valiantly for our country.”

“Thanks for joining us,” said McEnany signing off, “And that is the real news.”

So far the video has 1.1 million views.

When Trump TV version 1.0 launched in the waning days of the election, CNN president Jeff Zucker was asked about it: “I’ve seen a little bit of what they’re doing. The beauty of the internet is that anybody can be a broadcaster now. I think the future of that depends on the next 13 days,” he said.