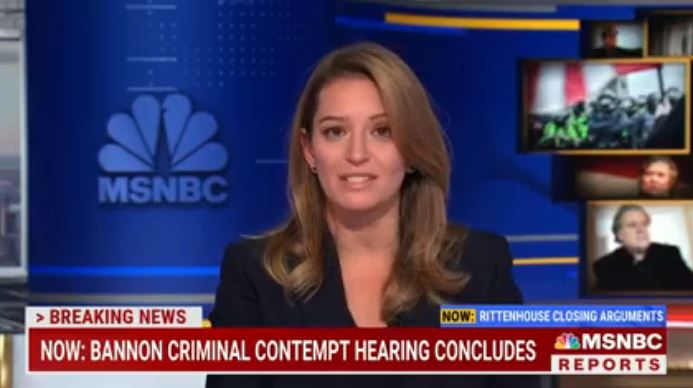 Katy Tur returned to MSNBC today, but not at her usual time and under unusual circumstances.

Tur did not appear at 2 p.m. ET. MSNBC was presenting live, rolling coverage of the Kyle Rittenhouse trial, specifically the prosecution’s closing arguments, at that time. Then, at around 2:40 p.m. ET, the network cut to Steve Bannon and his lawyer making remarks from outside the D.C. Circuit courthouse after Bannon had surrendered to federal authorities for defying a congressional subpoena related to the Jan. 6 Capitol riot.

MSNBC returned to live coverage of the Rittenhouse case at around 2:53 p.m. ET, and left around 10 minutes later when Judge Bruce Schroeder called for a break.

Hallie Jackson usually comes on at 3 p.m., but it was Tur, not Jackson, who remained on-air into the 3 p.m. hour. The broadcast and cable networks (excluding CBS TV) televised the president and vice president’s remarks before the $1.2 trillion infrastructure bill signing, beginning just before 4 p.m. ET.

We’ve learned that Jackson is feeling under the weather today, which is also why Tur remained on-air.

Tur has been on maternity leave since May. Her baby girl Eloise Judy Bear Dokoupil was born on May 13, and is the second child (and first girl) for Tur and CBS Mornings co-host Tony Dokoupil.

MSNBC has made some changes to its weekday lineup since Tur went on maternity leave in the spring, and she will now be passing the baton to her good friend Hallie Jackson each weekday at 3 p.m. ET.