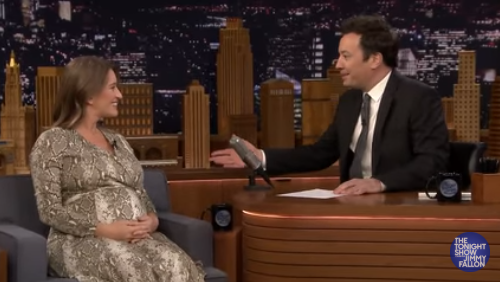 MSNBC anchor Katy Tur stopped by The Tonight Show on Wednesday, and provided Jimmy Fallon and the audience her thoughts about how the Michael Cohen testimony went.

Tur has some unique insight into Cohen. She dealt with Trump’s now-former personal attorney many, many times, going back to the 2016 presidential campaign, which she covered for NBC News.

She says that Cohen came off as pretty credible, and “authentic,” despite the fact that he has lied to Congress in the past, adding “he came off as how he actually is, and it didn’t seem rehearsed or practiced…I think he came off as well as he possibly could have.”

“He was willing to say, ‘I don’t know.’ If you’re going to attack his credibility, I would look at the portions where he was talking about Russia, because that was where — that would be where he would lie potentially; and when he was talking about Russia, he said flatly, ‘I don’t have any direct evidence that Donald Trump or the campaign colluded with Russia, but I do have my suspicions and he did offer corroborating evidence for other things but he did not offer corroborating evidence for that. So, I think when you look at whether or not to trust him, you have to consider what he was willing to say, what he was not willing to say. But also, I mean, he’s in front of congress. He’s already been convicted of lying to Congress…”