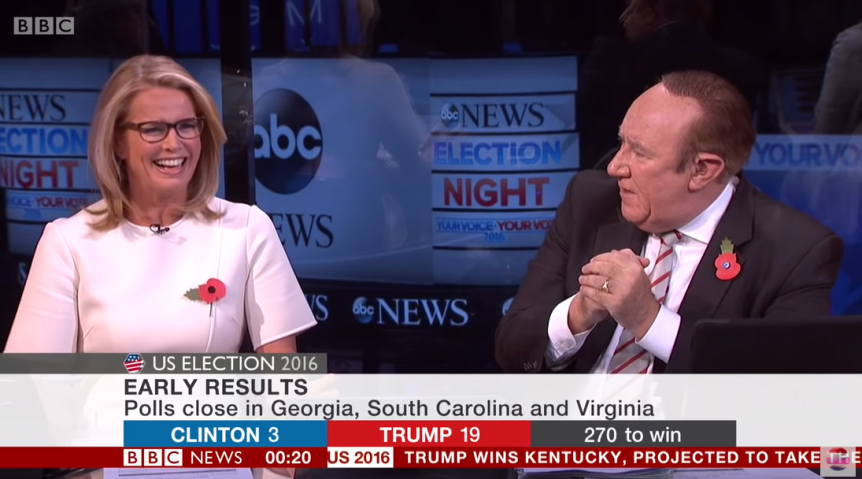 Kay will be broadcasting from Washington, D.C., with Neil providing analysis from London. This is different from 2016, when Kay and Neil co-hosted the election night coverage together from a studio overlooking Times Square.

Jon Sopel and Clive Myrie will be with the Trump and Biden campaigns on election night, with BBC reporters including Emily Maitlis and Nick Bryant in the battleground states and a panel of political strategists assessing how the night unfolded, how the campaign was lost and the impact the U.S. electorate’s decision will have on the years ahead.

“The 2020 U.S. election cycle has been endlessly surprising, which is fitting for a year that’s been anything but normal,” Kay said in a statement. “It will be a hard-fought contest right to the end, and I’m excited to bring global BBC audiences the story on election night and in the days after. When trustworthy information is hard to come by, we at the BBC are committed to fairly and accurately reporting events, whatever happens.”

“This has been a presidential campaign like no other in the long history of America’s democracy,” added Neil. “And not just because it’s being fought in the midst of a pandemic. In many ways it’s turned into a referendum on Donald Trump. Do you want to continue with four more years of the Trump roller coaster? Or would you prefer a return to something approaching normal with mainstream Democrat Joe Biden? That’s the choice Americans must make on November 3rd.”

Global audiences will be able to follow all the action on the BBC News website’s dedicated U.S. Election live page for all the latest updates in the run-up to the election, on results day itself and after. There will also be live maps tracking results for the presidential, Senate and House of Representatives races.

“The U.S. presidential election is one of the world’s most important political events, and always has a big impact on politics across the world,” said BBC head of newsgathering Jonathan Munro. “Our goal is to make sure that we provide our audiences with the complete picture over the next three weeks. On election night, Katty and Andrew will bring an incredible level of experience, knowledge and authority from both sides of the Atlantic.

On Wednesday morning, coverage will see Laura Trevelyan taking over in Washington and Matthew Amroliwala in London from 9 a.m. GMT (4 a.m. ET) on BBC World News.