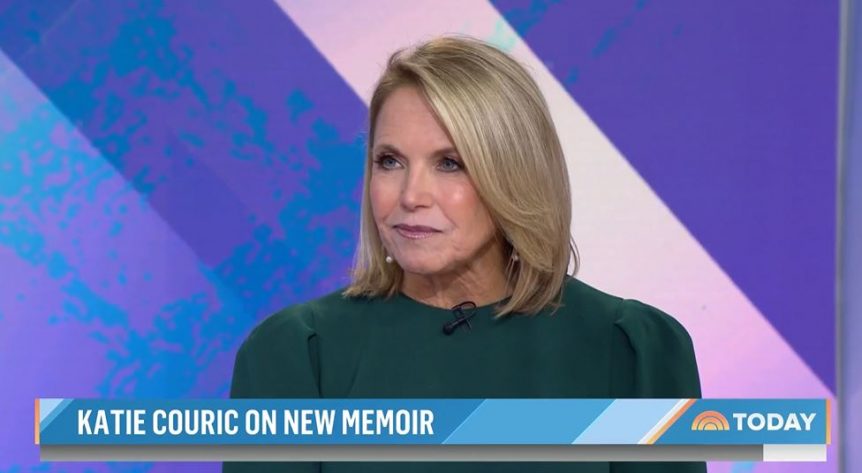 Former Today show co-host Katie Couric returned to her former program on Tuesday to promote her new memoir, Going There.

During an interview in the show’s 7 a.m. hour on Tuesday, Guthrie pressed Couric about a revelation from Going There which has since opened the former morning show host up to criticism. Couric writes in her memoir that she edited out parts of a 2016 interview for Yahoo News with the late Supreme Court justice Ruth Bader Ginsburg because Couric “wanted to protect” the justice. Couric had questioned Ginsburg on NFL quarterback Colin Kaepernick’s decision to kneel during the national anthem to protest racial injustice, which eventually led to a bigger movement among players across pro sports. Ginsburg was highly critical of NFL players (and others) participating in the act.

“How did you justify that?” Guthrie asked, regarding Couric’s decision to edit out Ginsburg’s answer. “It violates a cardinal rule of journalism.”

“I think what people don’t realize is we make editorial decisions like that all the time,” responded Couric. “And I chose to talk about this and put it in the book for a discussion.”

Couric went on to defend her decision by arguing that she’d included Ginsburg’s most important comments. Guthrie didn’t seem convinced, however, noting that Couric wrote that she made that editorial call to “protect” the Justice.

“That’s not an occasion that you’re using that objectivity that is so important as journalists,” Guthrie said. “And the question is whether that undermines journalism at a time when reporters are under attack for bias like that. … Do you think it was wrong, now that you look at it in the light of day?”

“Yeah, ultimately, I think I should have included it,” Couric said. “But I think it’s really important to look at what I did include. She had to make a statement afterwards saying her comments were harsh and dismissive. I still believe I used the most critically important response. But I think you’re right, it might have illuminated it even more if I had included that other statement.”

In Going There, Couric writes about her working relationship with Matt Lauer, who was fired from the broadcast in Nov. 2017 over allegations of sexual harassment.

She told Guthrie they now have “no relationship,” adding, “as I got more information and learned what was going on behind the scenes, it was really upsetting and disturbing,” she told Savannah. “It was really devastating, but also disgusting.

“I think what I realized is that there was a side of Matt I never really knew, and I tried to understand why he behaved the way he he did, and why he was so reckless and callous and, honestly, abusive to other women.”

Couric hosted NBC’s Today from 1991-2006 before leaving for CBS to anchor The CBS Evening News, which she did until 2011.