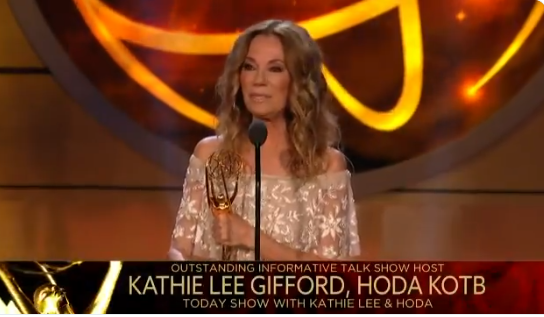 The 46th Annual Daytime Emmy awards took place on Sunday in Pasadena, and TV news received some love from the Academy.

Congrats Kath!!!! You were great last night ❤️❤️ and our amazing producers… wow.. this belongs to you…. Hope and Haley “happen” to be up and “cheering” you all on ❤️ @KathieLGifford https://t.co/hR4AEaWVkK

Congratulations to everyone on TODAY’s two Daytime Emmy wins this weekend.

Kathie Lee and Hoda won the award for Outstanding Informative Talk Show Hosts. Kathie Lee, who accepted the award, was also honored with a special tribute for her legendary television career. Additionally, TODAY won Outstanding Musical Performance in a Daytime Program for “The Band’s Visit.” This marks the third year in a row TODAY has won in this category.

NBC News was well represented with a group of producers cheering us on at the ceremonies in Pasadena this weekend. These awards showcase the broad range of outstanding work this team does.

Other big winners at this year’s 46th annual Daytime Emmy Awards were Kelly Ripa and Ryan Seacrest of Live With Kelly and Ryan in the Outstanding entertainment talk show hosts category. CBS’ The Yound and the Restless won Outstanding drama series. Young and the Restless actor Kristoff St. John, who died of cancer at the age of 52, was honored during the ceremony by his longtime co-star Shemar Moore.

There was also a standing ovation for Jeopardy host Alex Trebek, who Outstanding game show host. The iconic daytime host was recently diagnosed with pancreatic cancer, but has said he plans on returning for yet another season of Jeopardy in the fall.