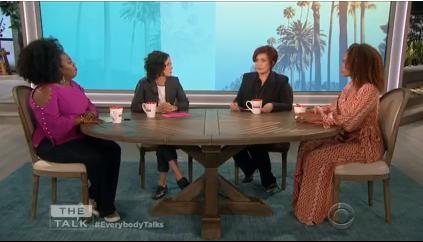 The hosts of the CBS daytime panel program The Talk spent the first 12 minutes of this afternoon’s broadcast—the Season 9 premiere—addressing the Sunday night departure of CBS Corp. chairman and CEO Les Moonves.

The topic hits especially close to home considering Moonves’ spouse happens to be one of their colleagues on The Talk, Julie Chen.

The CBS host was not on the program today, releasing a statement ahead of the live broadcast that said, “I am taking a few days off from The Talk to be with my family. I will be back soon and will see you Thursday night on Big Brother.”

The last time The New Yorker’s Ronan Farrow published a bombshell story about Moonves, back in July, Chen said the following on her program:

Some of you may be aware of what’s going on in my life the last couple of days. I issued the one and only statement I will make on this topic on Twitter. I will stand by that statement today, tomorrow, forever.

Co-host Sharon Osbourne addressed the elephant in the room during the open: “We’re about to talk about something that affects everybody’s lives here at CBS. I have never been nervous in my life, but I’m kind of very nervous right now. As you all know Osborne continued. Julie’s husband is in the news, and she is taking off time to be with her family.”

Osborne then teed up a video showing how the big three morning shows covered Moonves’ departure, including Norah O’Donnell‘s remarks on CBS This Morning.

After the video was complete, Osbourne said the following:

I want to say that whatever times of hardship I have had over the last 8 years, Julie has always been there for me. She has been a friend, and is someone who I admire and respect greatly. It’s very embarrassing and upsetting to have to talk about her husband, but we do because we feel it’s right.

I personally knew Les Moonves in a superficial way. It was: “Hello, how are you?” Nothing more. I know nothing about the man, other than he’s Julie’s husband, and that he was the head of the biggest network in the world and the most powerful man in TV.

I was asked a couple of months ago to make a statement supporting Leslie, which I felt I was as diplomatic as I could be with the statement that I made.

But now after seven more women have come out, the stories are so similar, the pattern is so similar that for me, it’s — he’s not been convicted of any crime, but obviously the man has a problem. I like to say that Mr. Moonves to step down and Mr. Moonves is an extremely wealthy man and good luck to him for being a wealthy man. He has worked hard. He made this network number one. However, when a new regime comes into a company, we all know they sweep clean. Everybody here at CBS is nervous about their jobs. Yes, the ladies at this table will go on and we’ll probably find another show if our show, please god, it’s not taken off, we’ll always find another job and nobody is, you know, in that position yet. It’s just historically when somebody new comes in, things change. I care about the producers. I care about the crew. I care about as Mr. Moonves would say, the little people and that’s who I care about.

Co-host Sara Gilbert added,  “We’ve been together since the beginning. I love her, I support her always. However, this is an important time in our culture, and just because this hits close to home, it doesn’t change the story. All women’s stories, and these women’s stories, matter. This is very serious, and the appropriate actions need to take place. I am happy when women are heard because for a long time, they haven’t been.”