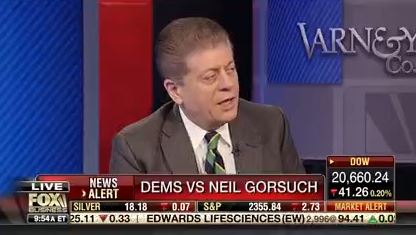 The FNC senior judicial analyst was on during the news block of programming, not on an opinion show, where Bill Hemmer began by asking him about his surveillance reporting two weeks ago which got him sidelined until this morning.

“You still stand by that?” asked Hemmer

“I do,” said Napolitano, “And the sources stand by it. The American public needs to know more about this and not less.”

During a Fox & Friends segment two weeks ago about wiretapping allegations, Napolitano reported that three sources told him “President Obama went outside the chain of command, he didn’t use the NSA, CIA, FBI and he didn’t use the Department of Justice. He used GCHQ.”

GCHQ is the acronym for British intelligence which called his report “utterly ridiculous.” After the judge’s comments were cited by Pres. Trump, Fox News anchor Shepard Smith went on the air to say the news side of Fox News “cannot confirm Judge Napolitano’s commentary.”

A few days later, on March 20, Fox News benched the judge. Until this morning.

“No change then?” asked Hemmer.

“Correct. I think a lot more is going to come,” Napolitano said.