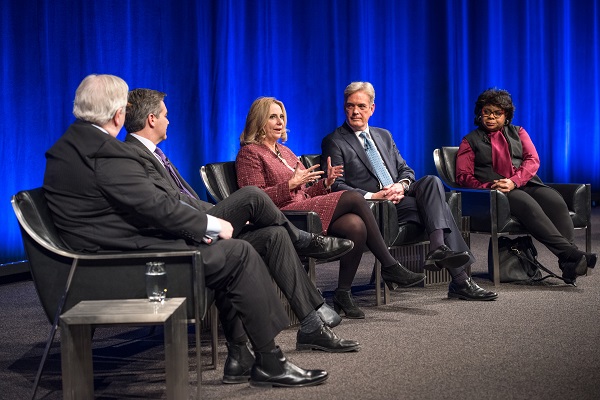 We’re used to seeing those types of numbers in other countries, not in the U.S.

But times have obviously changed, and these changes were addressed at an event at the Newseum last night which focused on the state of journalism in the era of Trump.

The Committee to Protect Journalists was a co-sponsor of the event, one which Roberts, in particular, got a lot out of.

“I thought we had a very good discussion last evening,” Roberts told TVNewser this afternoon. “The overall relationship between the press and the White House has created new challenges in covering this administration.”

Roberts is very aware of how much pressure he and his colleagues are under each and every day.

“It is incumbent on all of us to take the time to triple check our sources, pursue the facts and get the story right.  Every time a big story is incorrect, it gives the president more fuel for his accusations of fake news,” he said.

Speaking of fake news, the discussions took an odd turn at one point after a member of the audience remarked that President Trump had announced the list of his “fake news awards” winners. When CNN chief White House correspondent Jim Acosta was made aware that CNN was among the recipients, the feisty journalist stated: “I would say, having been called fake news myself, the president is the king of fake news.”

But the announcement wasn’t particularly amusing to anyone on stage. “Why do this now? This is not a joke,” said Ryan.

Roberts can sort of see where the administration is coming from in its critiques of the current White House Press Corps.

“We are at a point I have never witnessed before,” admitted Roberts. “The highly charged convergence of a press corps that is more aggressive toward this president than any other in recent memory and a president who feels terribly aggrieved by the daily onslaught and wants to fight back.”