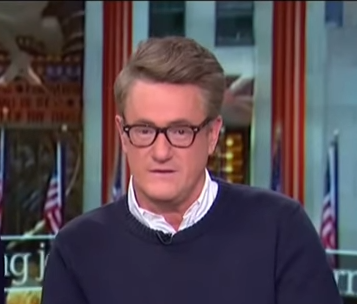 Consistent Morning Joe viewers are aware of Joe Scarborough‘s love for sports, particularly Liverpool F.C. of the Barclays Premier League. Well, the cable news host is taking his talents to the pitch (I mean, the studio) as host of This is Football, a new series for NBCSN that will take viewers inside history, tradition and rivalries between the Premier League clubs and their fans.

The show will launch on Boxing Day – Tuesday, December 26 –  at 4 p.m. ET, and is slated for three episodes, one of which will take place Super Bowl weekend. NBC is broadcasting the Super Bowl this year.

The series premiere focuses on the Manchester Derby rivalry (Man United-Manchester City). The episode won’t just focus on the two teams, but Scarborough will also explore the city of Manchester, known for its sports and music scenes (two of Scarborough’s favorite pastimes).

He will interview Alex Stepney and Paddy Crerand, two former longtime Man U players; Mike Summerbee, who played for Man City for a decade; and Sir Howard Bernstein, the former ceo of Manchester City Council.

In addition, Scarborough talks with the owner of The Old Nags Head bar, one of the biggest United supporter bars in Manchester; a Manchester United chant writer, and a Manchester City super fan who has attended the last 800 matches.

In addition to Liverpool, Scarborough roots for MLB’s Boston Red Sox and the University of Alabama Crimson Tide. His love for soccer is relatively new. College football is the sport du jour in the deep South, and Scarborough hails from the Florida Panhandle.

“English football is primal in a way that you have to see to believe,” says Scarborough. “Until I took a deep dive into the Premier League’s most heated rivalries, I thought SEC football battles were the most tribal in sports. I think I was wrong.”

The series is produced in partnership with IMG and Dynamo Films.