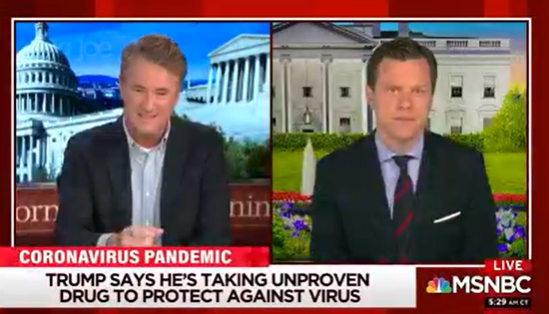 President Trump told the press yesterday that he has been taking the antimalarial drug hydroxychloroquine as a prophylaxis for Covid-19. This, despite the majority of the scientific community warning against using this drug, including the FDA, which has said that it could actually cause health complications for some people.

Apparently this hasn’t convinced the president not to use it.

Many TV newsers slammed the move, even those employed by his go-to network.

On his 4 p.m. Fox News program, Neil Cavuto sternly criticized the president for his decision to take the drug. “This is stunning,” Cavuto said. “A number of studies show those certainly vulnerable in the population have one thing to lose, their lives.”

Trump didn’t appreciate Cavuto’s criticisms (it’s worth noting that Cavuto has criticized the president’s actions on multiple occasions in recent years). He tweeted insults at Cavuto, slammed his network and retweeted vulgar tweets from his fans that had been directed at Cavuto.

Earlier today on Morning Joe, co-host Joe Scarborough went as so far as to state he didn’t think Trump was actually taking the drug.

He added: “I say this to seniors who I’m so worried about, and I know we’re all worried about you, because the president’s been acting so reckless over the past several months. Listen to Neil Cavuto. It will kill you. This will kill you, Fox News’ Neil Cavuto said. That’s what doctors will say, too. The FDA said, take it if you’re in the hospital or take it if you’re in a closely watched, clinical trial. Don’t take it unless you’re under those two circumstances.”