NEXT:30 Most Impactful TV Newsers of the Past 15 Years: Rachel Maddow
PREVIOUS:Report: Sky News Is Going to Livestream Everything That's Happening in Its Newsroom For 17 Straight Hours 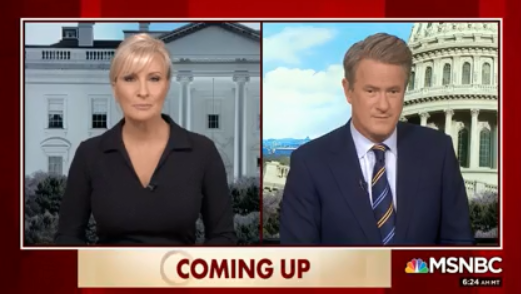 If you have been watching Morning Joe on a consistent basis over the past six months, you have probably noticed that Joe Scarborough and Mika Brzezinski are rarely co-hosting the show from the same table as Willie Geist and the show’s rotating panel at 30 Rock.

The Washington Post’s Paul Farhi took a deep dive into this phenomenon this morning, via tweet thread.

It’s worth noting that the screenshots of Scarborough and Brzezinski in these below tweets aren’t from today. Brzezinski hosted this morning’s telecast, and announced at the outset, “Joe is still under the weather.”

Scarborough hasn’t been on the program since Thursday, Jan. 17.

Farhi first noted that there hasn’t been anything on screen noting where exactly Scarborough and Brzezinski are located. When TV newsers are hosting their show from outside the usual stomping grounds, there’s usually a chyron letting the audience know where exactly they are; or it’s made clear at the outset that they’re in fact not in studio.

First, it’s not entirely clear from these shots where Joe Scarborough and Mika Brzezinski are. There’s no on-screen graphic (or “chyron”), marking their locale, as most TV news programs do, and no announcement, as is typical on other news programs. pic.twitter.com/lzVpUoX99S

Farhi also noted the Washington DC backdrop. Brzezinski has the White House behind her and Scarborough has the Capitol behind him. So, Scarborough and Brzezinski must be checking in from the District, right?

Where in Florida? Farhi says Jupiter.

Why Jupiter? Well, for one thing, the weather is much nicer there than New York City this time of year. But Mika and Joe own a home there. And both have parents living in Florida that they’re looking after.

OK. So if they’re co-hosting the show from a studio in Florida, why aren’t they in the same camera shot?

What you don’t see in these shots: Joe and Mika are actually sitting a few feet away from each other. But they each address their own camera rather than turning to speak to each other (because doing that would expose the fact that they’re sitting on a makeshift set).

So, is all of this actually a problem? The answer is complicated. Multiple Morning Joe viewers have noted the duo’s absence to us, going back to the summer. One rabid Morning Joe viewer who has no connection to the TV news industry told us back in August (and I quote), “It looks like Joe’s in a bunker somewhere. It has a big effect on the live broadcast, in my opinion. The synergy is not there.”

Farhi apparently found a similar sentiment, per the tweet below:

Awkward? Well, yes. People on the show say the multistate production arrangement has caused some concern about its affect on the “chemistry” of the panelists and the co-hosts. They say having everyone on set at the same time creates a smoother show (and is easier to produce).

As we pointed out last year, Morning Joe has established itself as the No. 2 morning show in cable news, and in 2018, delivered MSNBC’s largest total audience in the 6 – 9 a.m. time period ever.

Morning Joe regularly finishes ahead of CNN New Day in total viewers, but recently surpassed New Day in that key A25-54 demo as well. MJ also posted year-over-year audience growth for the 4th consecutive year, while Fox & Friends and New Day were down in 2018 from 2017.

So while there have been complaints and concerns about the hosts’ co-hosting remotely, both from folks affiliated with the program, and from the show’s die-hard fans, MSNBC’s powers-that-be probably see no real reason to demand that the hosts come back to the studio as long as the ratings hold up.

And that’s OK. But at least be transparent with your viewers, and let them know where you are, right? Chances are they’d understand and if history is any guide, they’ll continue to tune in.