NEXT:Murphy Brown Returns to CBS
PREVIOUS:Which TV News Correspondent Got the Most Airtime in 2017? 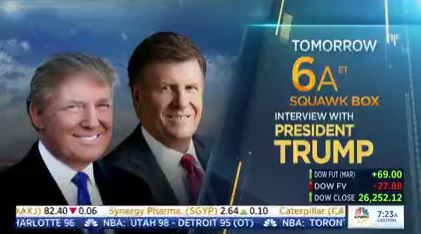 CNBC has locked in its first interview with Pres. Trump.

The president will sit down with CNBC’s Squawk Box co-host Joe Kernen today for an interview that will air tomorrow morning. The sit-down comes before Trump addresses the World Economic Forum gathering in the Swiss city. “This is a huge interview,” said Becky Quick on this morning’s Squawk Box.

Kernen will talk about the economy, the markets, tax reform, the infrastructure plan, global trade deals, and the DACA deadline. The interview will begin airing in the 6 a.m. ET hour. Trump’s speech is set for the 8 a.m. ET hour.

This is Trump’s first interview with a non-Fox host since he sat down with NBC’s Lester Holt last May. NBC News is also hopeful Trump will sit for the traditional Super Bowl Sunday interview.

Earlier this week, before she left for Davos, Quick told told TVNewser the Davos crowd “is lucky to have President Trump addressing them. It’s going to be fascinating and I’m thrilled to have a front-row seat to watch it all unfold.”

Ready when you are, Mr President… pic.twitter.com/yq3pntRGd2

Trump was once a regular on CNBC, when the network re-aired his Celebrity Apprentice.