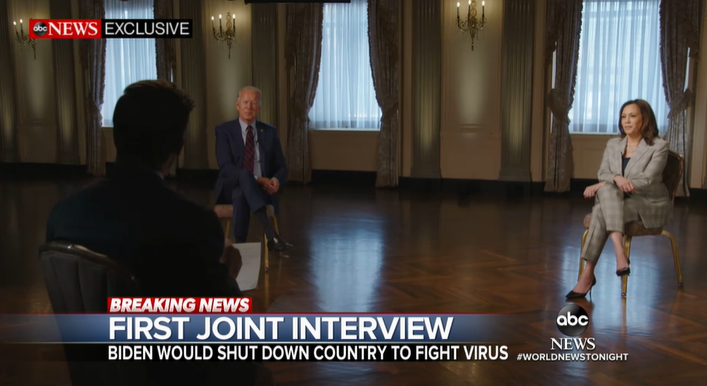 ABC leaked dialogue and a clip from the interview that will air on tonight’s broadcast of ABC World News Tonight.

Among the questions Muir asked Biden was how, if elected president, he would try to stop the spread of Covid-19.

“I would shut it down,” he said, referring to the U.S. “I would listen to the scientists,” he said.

Biden also criticized what he argued is the “fundamental flaw” of the Trump administration’s response to the pandemic, that the nation cannot begin to recover economically until the virus and public health emergency is under control.

“I will be prepared to do whatever it takes to save lives because we cannot get the country moving until we control the virus,” Biden told Muir. “That is the fundamental flaw of this administration’s thinking to begin with. In order to keep the country running and moving and the economy growing, and people employed, you have to fix the virus, you have to deal with the virus.”

The prime-time special is entitled The Ticket: The First Interview, a special edition of 20/20, and it will air Sunday at 8 p.m. ET on ABC.