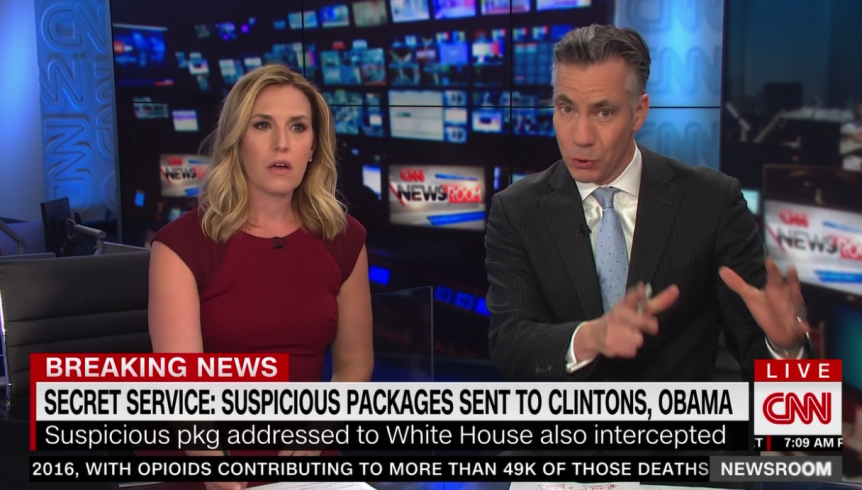 The security sweep of our building continues. There was some powder found within the package that was sent, and that powder now needs to be examined to determined what it is. As a result, it will take some time until we know more about the safety of the building. I will continue to keep you all posted as we know anything more about timing.

I want to commend all of our colleagues in New York, in particular, and elsewhere, who have helped keep us on the air as this crisis has unfolded. I am really proud of all of you. Thank you.

To All NY Based Employees –

Our NY Bureau remains evacuated, with NYPD on the scene. In Atlanta at the CNN Center, a facility that is open to the public, we are putting up the magnetometers at the entrances to the building. We remain vigilant regarding security concerns across all of our global locations.

As you communicate via social media, out of abundance of caution, please refrain from sharing any images or geo tags that would reveal your location. We have no particular reason to be concerned, but just think it would be the most cautious approach.

I also want to say a special thank you to David Rhodes and CBS News for graciously offering their assistance while we deal with this…really nice to see from our fellow journalists.

To All NY Based Employees –

The Time Warner Center has been evacuated out of an abundance of caution, as a result of a suspicious package having been received in the mailroom.  We are working with authorities to determine the severity of the situation.  The NYPD is on scene, and we we working closely with them to take every precaution.  We are also checking all bureaus around the world, out of a complete abundance of caution.

We expect more information very soon, and we ask that you remain calm and patient.    If you would feel more comfortable leaving the premises, please do.  Your safety is our top priority, and we will communicate again shortly.

Jim Scuitto and Poppy Harlow were in the middle of co-anchoring CNN Newsroom when an alarm started going off.

Scuitto and Harlow left the building.

So as we were coming on the air just a short time ago with Poppy Harlow and Jim Sciutto, who were anchoring from our set in New York, the fire alarms started going off. Our viewers perhaps could see that.

Our building in New York has been evacuated because the NYPD is now investigating a suspicious package, something that was sent to the building at 10 Columbus Circle, which is in New York, and the building that houses our offices in New York.

I’m told by a law enforcement official that the bomb squad is responding to the office to check on this suspicious device. We don’t know if the package was actually addressed to CNN or to someone else in the building, but as a precaution, the building there, the NYPD along with the bomb squad, have said the building should be evacuated. They’re going to respond and investigate the package.

CNN’s reporting on itself has been admirable. Scuitto and Harlow called into the network’s special coverage in the 10 a.m. hour, anchored by Wolf Blitzer. 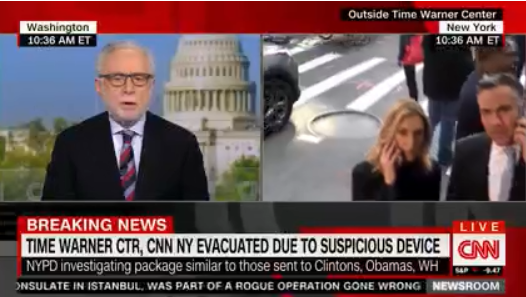 Scuitto: Several floors of the CNN center have been evacuated, our floor included. At this point, negative on the question of whether there have been any injuries here. Our concern was raised because we’ve seen a number of ambulances. They are exercising active precaution here because they don’t know in incidences like this the extent of the threat. Is there a secondary device they don’t know about? So again, these guys are trained for this. They train for it every day. They stage little mock responses all the time for incidents like this, to get on the scene quickly. We saw them in a real life scenario here do just that.

Harlow: The first responders have been remarkable here, as have all of our CNN colleagues who helped us get out safely and get us up on the air here to bring you the news as it is happening.

How quickly this all transpired, Wolf, I think is important to note. After our show began this morning, Jim and I reported about these suspicious explosive devices going to the homes of former presidents Clinton and Obama and then to the White House. It was just minutes later that we heard there was one here at CNN as well. This all transpired in less than an hour. The concern is how coordinated could this have been…

The network is reporting that the bomb cannot be detonated on the scene, it will be taken to Rodman’s Neck in New York to be detonated. 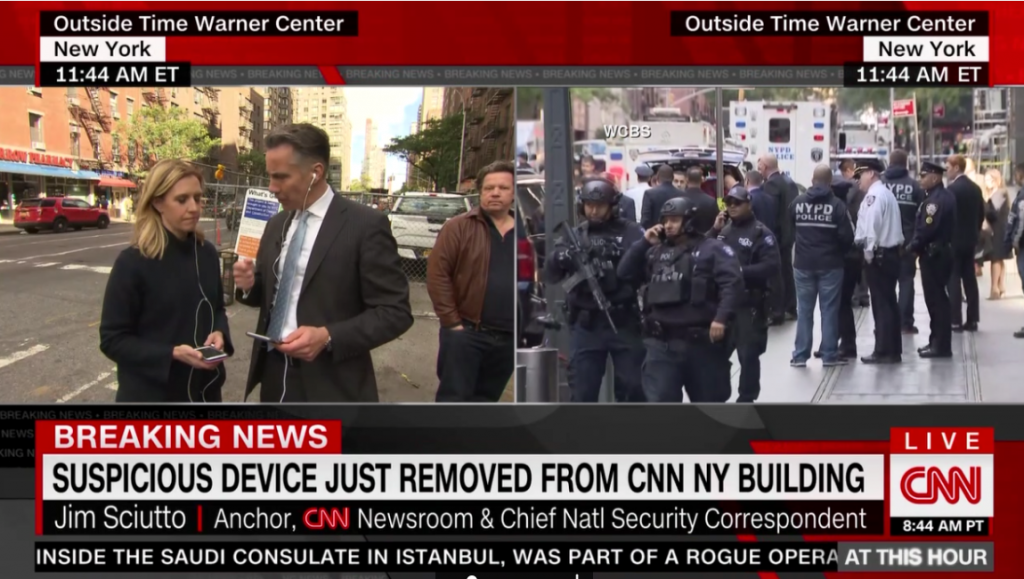 This entire ordeal comes not long after the Secret Service received a package addressed to Former First Lady Hillary Clinton near her home in Chappaqua, New York, roughly 40 miles north of CNN – New York. The Secret Service also intercepted a package in Washington that had been sent to President Obama.

The previous day, a suspicious package was sent to the home of progressive political donor George Soros, who, like the Clintons, lives in Westchester.

The Secret Service has already detonated one of the packages.

*This post will be continuously updated as additional info trickles in.