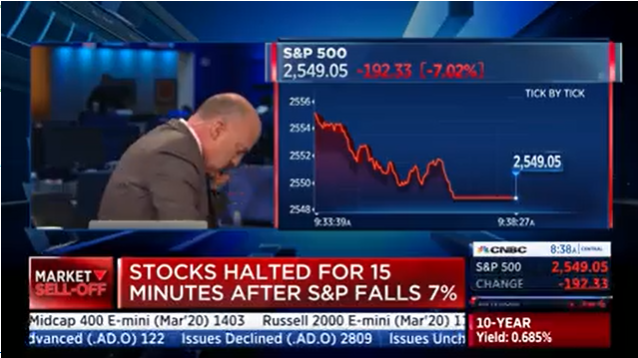 It’s very possible the Trump White House was paying keen attention to the back-and-forth on CNBC’s Squawk on the Street this morning.

CNBC Mad Money host / Squawk on the Street co-anchor Jim Cramer took a call live on-air, and minutes later claimed that he believes the Trump administration is now considering some of his ideas to combat the economic uncertainty during the COVID-19 pandemic.

“I do have to take this call, one moment,” Cramer said in the midst of a conversation about how the government could aid the markets.

Cramer proceeded to answer his phone: “Jim Cramer,” and took off his mic (after Squawk co-anchor David Faber instructed him to), and leaned away.

“Jim had to step away, an important call there I think that he wants to take that could be helpful,” said Faber, adding: “We have seen the lead come from corporate America here, I think there’s no doubt about that. A lack of leadership from the federal government I think is fair to point out has been the case here.”

After a back and forth between Cramer and Squawk on the Street’s lead anchor Carl Quintanilla for a couple minutes, Cramer suddenly returned to the conversation:

“I think that’s about to change, David… I do believe they’ll enact some of the ideas I just talked about earlier.”

I think that they will perhaps consider the idea that the federal government does not need to be paid during this period, so therefore the people, the working people, get paid and are protected,” he declared. “I think they’re debating the notion about whether they should have a trust fund, that they’re also debating the notion right now about whether the federal reserve should be able to guarantee credit lines. The treasury trust fund would indeed perhaps take advantage of the lower rates and make it so that people feel that their credit lines would be backed up.

I believe that these, that some of these plans that I mentioned are being debated right now.”