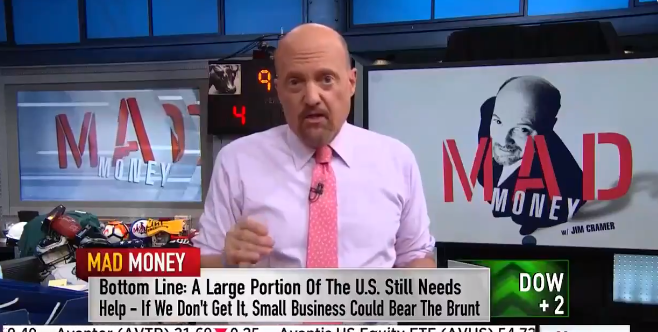 CNBC’s Jim Cramer can get a bit animated on-air. Usually, it’s harmless, but this morning, he went too far.

This morning, Cramer conducted a live interview with Speaker Nancy Pelosi during Squawk on the Street. The duo discussed the ongoing congressional negotiations for a second Covid-19 relief bill. At one point during their discussion, Cramer referred to the House Speaker as “Crazy Nancy,” imitating the crude nickname President Trump has given her during his presidency.

“What deal can we have, crazy Nancy—I’m sorry, that was the president, I have such reverence for the office, I would never use that term, but it is hard isn’t it?,” said Cramer.

Speaker Pelosi fired back, “But you just did!”

Speaker Pelosi responded, “I know what you meant.”

Jim Cramer: “What deal can we have, Crazy Nancy? I’m sorry, that was the president. I have such reverence for the office. I would never use that term …”

Cramer apologized for the remark during Mad Money later in the day. The apology seemed sincere:

Jim Cramer’s apology: “I made a very stupid comment. It was a tongue-in-cheek attempt to make a point about the harsh tone about the negotiations in Washington but it fell completely flat and I apologize for that.” Video here pic.twitter.com/2PpVhDlVEt