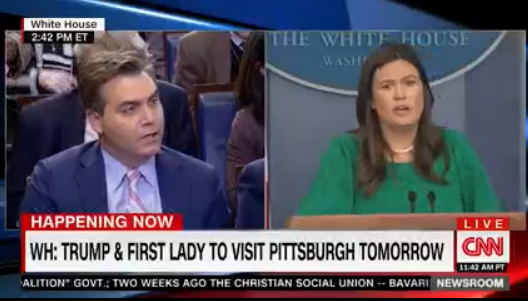 Sanders opened with some remarks about the tragedy at the Tree of Life synagogue in Pittsburgh on Saturday:

This atrocity was a chilling act of mass murder. It was an act of hatred. above all, it was an act of evil. Antisemitism is a plague to humanity. We all have a duty to confront antisemitism in all its forms and everywhere an anywhere it appears. The American people reject hatred, bigotry, prejudice and violence. We are a nation that believes in religious liberty, tolerance and respect. We are a people who cherish the dignity of every human life.

Today, America grieves for the precious lives that were stolen. our hearts ache for every person who lost Americans that were murdered represented the best of our nation. They were brothers and sisters who looked out for each other. they were doctors who cared for citizens in need. They were proud grandparents who taught their children to value faith, family and country; and they were the religious heart of the Tree of Life community.

Our nation mourns the loss of these extraordinary Americans and we also pray for those who were wounded. Our hearts are with the four brave police officers who were shot and injured while trying to stop the attack. We thank God for these officers and for every member of law enforcement who responded swiftly and bravely. In the wake of the attack, we have witnessed Americans of every faith and tradition coming together to mourn with their fellow citizens, to support one another and stand in solidarity with America’s Jewish community. The president cherishes the American-Jewish community for everything it stands for and contributes to our country. He adores Jewish-Americans as part of his own family. The president is the grandfather of several Jewish grand children. His daughter is a Jewish-American and his son-in-law is a descent of Holocaust survivors.

Tomorrow the president and first lady will travel to Pennsylvania to express the support of the American people and grieve with the Pittsburgh community.

As one might have guessed, it got a bit a heated after that.

He asked if Pres. Trump has considered if his rhetoric might influence people around the country to do “awful things,” and also asked Sanders how the president can make his attacks on the press when the suspected bomber was apparently influenced by the him, and the synagogue shooter was at least partially motivated by the Central American migrant caravan Trump has continued to bring up in recent days.

“Why is he out there, when you say he’s trying to unite the country making attacks?” said Karl.

Sanders then accused the media of blaming Trump personally for “these ridiculous acts.”

That is outrageous that that would be the very first reaction of so many people across this country…The only person responsible for carrying out either of these heinous acts were the individuals who carried them out. It’s not the president, no more than it was Bernie Sanders‘ fault for the individual who shot up a baseball field of congressional Republicans.” 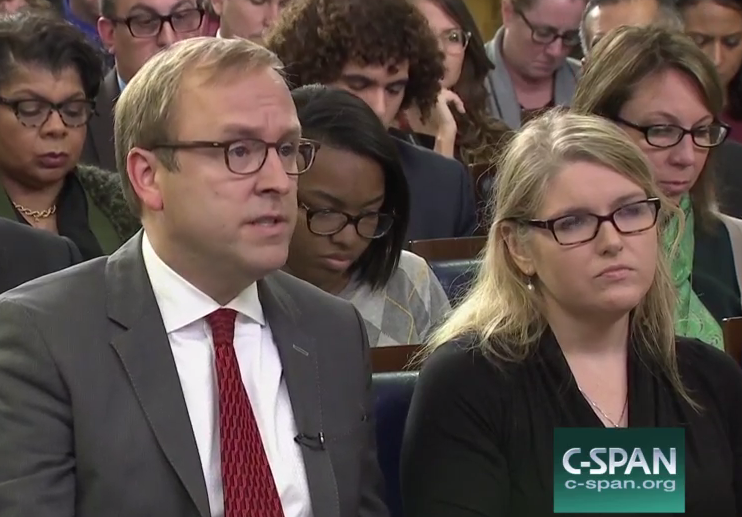 Jim Acosta asked Sanders about Trump’s  attacks on the “fake news media” tweet from this morning:

There is great anger in our Country caused in part by inaccurate, and even fraudulent, reporting of the news. The Fake News Media, the true Enemy of the People, must stop the open & obvious hostility & report the news accurately & fairly. That will do much to put out the flame…

“Shouldn’t you reserve the term ‘enemy’ for people who are actually the enemy of the United States, rather than journalists?” Acosta asked.

“The president’s not referencing all media,” Sanders responded. “He’s talking about the growing amount of fake news that exists in the country. The president’s calling that out.”

“Would that include my outlet, which received bombs last week?” Acosta followed up.

“I don’t think it’s necessarily specific to a general, broad generalization of a full outlet at times,” Sanders replied. “I think there’s individuals that the president would be referencing.”

It appears the CNN chief White House correspondent wasn’t done, “I mean, if the president is going to say the ‘fake news media are the enemy of the people,’ and if you’re going to stand there and continue to say that there are some journalists, some news outlets in this country that meet that characterization,” Acosta said. “Shouldn’t you have the guts, Sarah, to state which outlets, which journalists are the enemy of the people?”

The briefing was held a few hours after CNN had yet another pipe bomb addressed to its offices. Thankfully, this one, addressed to CNN Worldwide HQ in Atlanta, was intercepted at a nearby post office before it was able to reach the HQ.