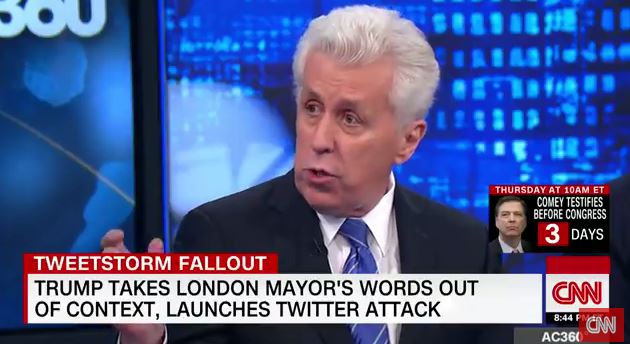 A day after being fired by CNN, conservative commentator Jeffrey Lord has nothing but good things to say about the network.

“I have enormous respect for CNN, they’re great people who do a great job. But I told them I totally disagree with this,” Lord said Friday in an interview with the Washington Post. “They were terrific to me, I really like the people there. But he [CNN Worldside president Jeff Zucker] has to do what he has to do,” Lord said.

Lord was cut by the network after writing “Sieg Heil” during a back and forth twitter fight with Media Matters’ Angelo Carusone Thursday. “Nazi salutes are indefensible,” a CNN spokesperson said. Lord says he’s already received two job offers, though he won’t say from whom. And he got a call from a very high-level supporter:

As he was being interviewed by a reporter from his hometown paper, the Patriot-News, the caller ID on his landline phone popped up on his TV screen: “Stephen K. Bannon.” (Lord won’t say what Trump’s chief White House strategist had to say to him).