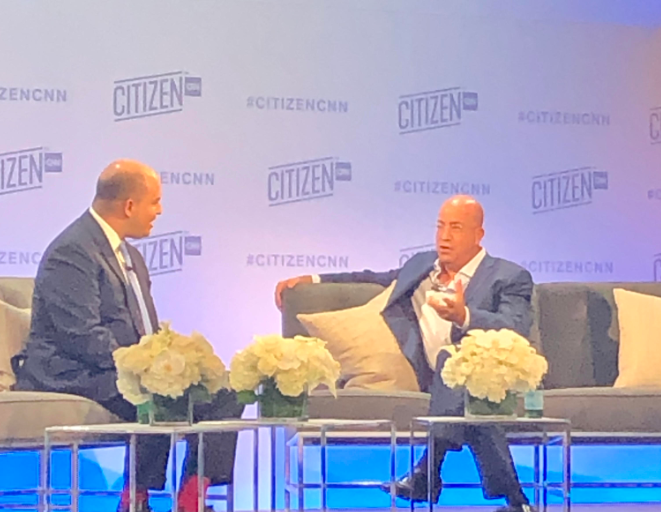 WarnerMedia News and Sports chairman and CNN Worldwide president Jeff Zucker was quite characteristically candid during an appearance at CNN’s Citizen conference this afternoon.

“I do have an announcement to make today: I am not resigning,” he stated, after being asked by CNN chief media correspondent and Reliable Source anchor Brian Stelter to address Pres. Trump’s recent tweet that he heard Zucker would be resigning.

Now that we have found out that @CNN is a virtual fraud, rumor has it that Jeff Zucker will be resigining momentarily?

“Too much executive time that day, maybe?” Zucker asked rhetorically. “I’m pretty used to it at this point, but it still is surreal.”

Zucker touched on a variety of topics he’s spoken about before, including his defense of hiring pro-Trump, conservative commentators to appear across the network’s programming.

There’s a lot of emotion around this president and his presidency, and so people who watch CNN, people who work at CNN– There are there are folks out there who are never going to be comfortable with anything the president says, anyone who defends the president. It’s my view that if we don’t hear from people who support the president, either in his administration or on Capitol Hill, or outside of the administration, if we don’t pay attention to those people and what they’re saying and and what they’re representing – I think what happens is we wake up the day after the election, and half the country is surprised that that Pres. Trump is president of the United States.

Stelter went on to fire a variety of media-related questions at his boss. He asked for his thoughts on Shepard Smith‘s departure from Fox News less than two weeks ago.

“Do you want to hire him?” Stelter asked.

“I think Shep’s a great journalist. I understand he’s not able to take any job for the foreseeable future. But when he’s available, he is somebody who I think is incredibly talented, and I would be very open to talking to him,” responded Zucker.

Stelter quipped that maybe Smith would take his Sunday, 11 a.m. slot, and Zucker joked “that’s what I was thinking.”

Stelter then asked his boss what Smith’s departure meant for Fox News.

“Look, I don’t know if I want to spend that much time on analyzing another organization,” said Zucker. “But to answer your question, let’s just say I was not that surprised.”

Zucker then turned up his criticism of Fox News, something he has never been afraid to do in the past. But it seemed especially explicit this afternoon.

Stelter pushed back, lightly: “They say they have dozens of great journalists.”

If you don’t think Fox News is a “journalistic organization,” I’d encourage you to take a look at the work my colleagues have done over the past year. Holding those in power accountable, risking their lives to get the story and reporting the facts. Here are just a few examples…