Fager has been ep of the 50-year-old broadcast since 2004, taking over for Don Hewitt, himself the 2000 Fred Friendly Award winner.

These are some very classic CBS News standards and values we live by, and I think that’s what sets us apart.”

This past season was about celebrating the show’s landmark 50th season. But Fager and his team are already looking to season 51.

“The work never ends for us,” he said. “The television season is a marathon and it seems never-ending sometimes when you’re in the middle of it. But I believe we had a really good season. We had a lot of stories with impact, which is really what we hope for. It’s kind of a wild world right now, and with the Trump world you have to move fast because things change pretty quickly.”

Fager said the show has “a couple of big interviews” already set up, adding, “there is a big political one that I can’t mention. I’m sure we’ll have many. I think it’s one of the things we’re proudest of is that people still fear 60 Minutes, but I think they trust it to be fair; that’s the thing we have always had going for us. It’s going to be a fair place to do an interview.”

One of the themes the show will be tackling in the new season is the growing opioid crisis.

“That has become a beat for us. We have at least one team on it regularly. We’re coming into the fall with a couple of very powerful and important stories about the epidemic,” said Fager.

As for the news inside CBS News, namely last week’s Page Six report speculating that CBS Evening News anchor Jeff Glor “could be headed out the door,” Fager said, “I think it’s very unfortunate. I think Jeff is doing a good job. He has been on the job for six months. I think he’s going to be terrific, and the whole team is adjusting to running the Evening News. It’s a very hard job…I had it. It took me six months to really feel comfortable. I know they’re going to be good, and CBS News is still a great organization. Period.”

Quinnipiac University presents the Fred Friendly Award “to honor those who have shown courage and forthrightness in preserving the rights set forth in the First Amendment. The award, which originated in 1994, bears the name of former CBS News president Fred Friendly, “a champion of free speech.”

Quinnipiac president John Lahey, Mark Contreras, dean of the school of communications at Quinnipiac, Ruth Friendly, widow of the late Fred Friendly each gave remarks before passing the baton on to Fager, who spoke for nearly 20 minutes focusing on the history of 60 Minutes and CBS News, Friendly, and the influence of 60 Minutes creator, the late Don Hewitt. 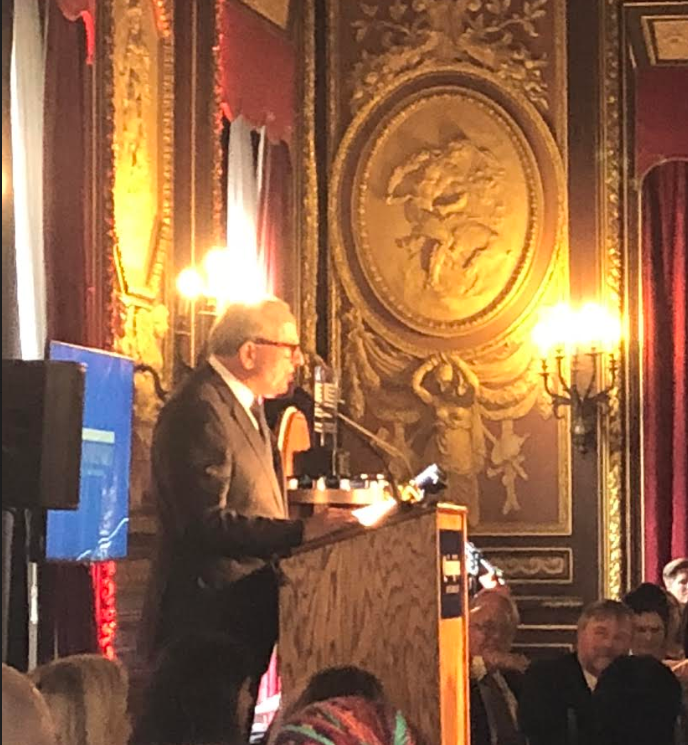