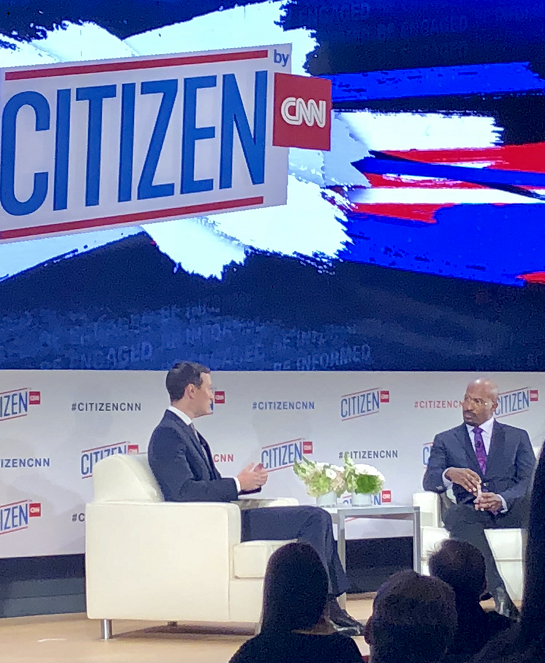 CNN’s first-ever day-long politics-focused conference, Citizen by CNN, kicked off with a discussion between senior advisor to the president Jared Kushner and CNN host Van Jones.

Kushner has been a high-profile advocate for criminal justice reform, something Jones is very passionate about…which is probably how CNN was able to get him to show up at the event, held at the Time Warner Center, next door to CNN’s New York HQ.

While most of the chat –which Jones said might just be Kushner’s first live streamed interview– focused on his work on prison reform, Jones was able to get Kushner to comment on a wide variety of topics, from trade, to the Middle East, to how he got his job.

“How did you get this job?…You have like, the dopest job in the world,” said Jones, which elicited some awkward laughter from the packed room.

Kushner talked about how he never expected to make his way into politics. “I had a great life, a great wife, and a great family,” but that when his father in law announced he was running for president, he ended up taking on more responsibility, in part because Trump didn’t have the traditional “entourage” that the typical politician came with; leveraging his business background.

He also talked about why has made prison reform a priority, citing his personal experience. It’s widely known that his father, Charles, was convicted of illegal campaign contributions, tax evasion, and witness tampering, and served time in federal prison. Kushner talked about reaching across the aisle, including discussions with Democratic congressman Hakeem Jeffries, of Brooklyn.

Jones later asked Kushner to comment on the murder Saudi journalist and global opinions contributor for the Washington Post Jamal Khashoggi, more than two weeks ago in the Saudi Consulate in Turkey.

Do he and the White House believe the Saudis account of what happened to the journalist?

“Right now as an administration, we are more in the fact-finding phase,” said Kushner. “We are obviously getting as many facts as we can from many different places, and then we’ll determine which facts are credible, and then after that the president and Secretary of State will make a determination as to what actions we should take.”

Kushner added that Saudi Arabia has been a very strong ally in the fight against terrorism and extremism in the region.

Jones pressed Kushner a bit here, asking if he trusts the Saudis to investigative themselves.

It was an answer that was not super popular among the journalists in the room.

“I advise him to be transparent,” Kushner remarked.

In a later session, Democratic Leader of the House of Representatives Nancy Pelosi was asked to respond to Kushner and the White House’s “fact-finding phase” remark.

“Follow the money,” she said, succinctly. “It’s an embarrassment.”