NEXT:Morning Joe Refers to Thursday Conversation With Former GOP Congressman Aaron Schock as 'Exclusive,' Even Though It Technically Wasn't
PREVIOUS:NAACP: 'CNN’s Lack of Black Representation in Leadership Roles Is Troubling' 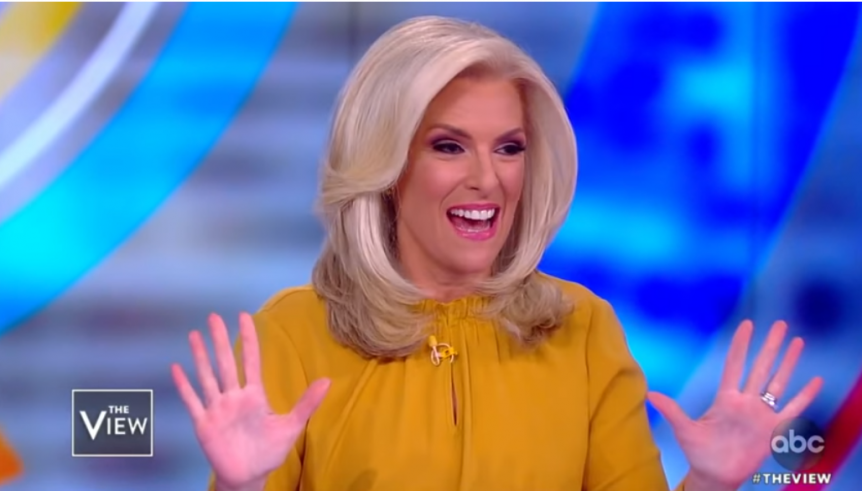 Fox News meterologist Janice Dean appeared on ABC’s The View this morning to promote her new autobigraphy, Mostly Sunny. It’s quite an honest and mostly optimistic book where the veteran Fox Newser explains the stories behind some of the most uncomfortable situations she’s encountered in her career in broadcast journalism.

She told The View and the audience about some of those uncomfortable dealings with the late Fox News chairman Roger Ailes as well as former radio shock jock Don Imus.

The View co-hosts Abby Huntsman and Meghan McCain worked at Fox News with Dean, and were at the table.

Huntsman started the segment by asking about Imus.

“It should have been my best job,” Dean said of the Imus show. “It had everything I had every learned in broadcasting. It had radio, it had television, I was writing the news, doing a ‘scum report,’ which is like an entertainment report, with a huge name in Don Imus. So, really it had everything I was good at, but it was the worst job I’ve ever had because he was very abusive to me from day one and I knew from the first week that I had to get out of the job.”

Dean said Imus was never physically abusive towards her, but was told never to look at him or talk to him unless asked to, and she said he called her “fat,” and “stupid,” and named bullets in his guns after people.

Then, Joy Behar shifted the conversation to the late Roger Ailes.

“I met him in the office first, and he was very charming, very kind—saw me on Imus,” Dean began. “He made a comment: ‘You’ve got that kind of ‘naughtiness,’ because I was the good time girl on Imus. But I didn’t think anything of it. But you have to realize that I came from a job where a man was pointing guns at someone [Imus]. I needed to get out, I needed any job.”

“Then the second meeting I had, he requested I meet him at a hotel lobby. I got a call from his secretary, saying: Meet at the Renaissance Times Square Hotel. We met there. He told me to order a drink. I ordered wine, he ordered wine. And then he took my hand, and put it in his hand, and asked: ‘Have you been thinking about me? Have you seen me in your life? I said to myself: ‘This is a weird job interview.’

“I just thought that maybe he was attracted to me? But I just felt, ‘I see you as a mentor, someone I’d like to work for.'”

Dean also remarked that she’s dealt with “some form of harassment” over her career, adding: “especially in broadcasting, unfortunately … Thankfully, it’s been changing, thank goodness.”

She concluded by praising her current employer: “I’ve been there 15 years, I love this company [Fox News], it’s a family to me. They did the right thing, but he [Ailes] wasn’t Darth Vader …”

Fox News has released the following statement to the media:

“Since Roger Ailes’ near immediate removal from the network following an external investigation by an outside law firm, Fox News has undergone a massive reorganization and cultural shift towards an open and transparent environment. The entire Human Resources department was overhauled, mandatory sexual harassment training was instituted, additional methods of reporting inappropriate conduct were added and communication with employees was increased tenfold. We operate under a zero tolerance policy for sexual harassment, and unlawful harassment of any form, which has been strictly enforced.”