NEXT:TV News Snapshot: 10 a.m. June 8, 2017
PREVIOUS:Comey Says He Gave Details of Trump Meeting to a Friend, To Be Given to the Media 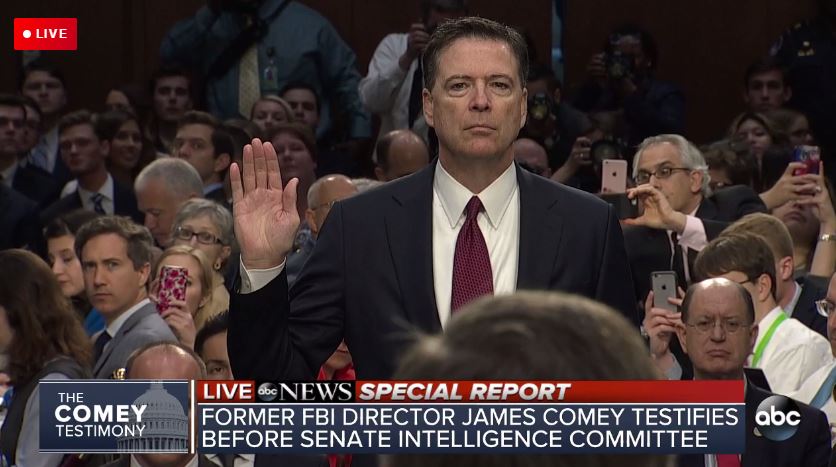 Instead of reading his prepared opening remarks, which were made public Wednesday, former FBI Director James Comey extemporized an opening statement during which he expressed sorrow that Pres. Trump tarnished his reputation and that of the FBI. Comey spoke directly to an interview conducted by NBC’s Lester Holt just two days after Trump fired Comey. In that interview, Trump called Comey “a showboat” and said the the FBI was “in turmoil.”

This morning Comey fired back.

“It confused me when I saw on television the president saying that he actually fired me because of the Russia investigation and learned again from the media that he was telling privately other parties that my firing had relieved great pressure on the Russia investigation. I was also confused by the initial explanation that was offered publicly, that I fired because of the decisions I had made during the election year. That didn’t make any sense to me,” Comey said, adding, “And though the law did not require any reason at all to fire an FBI director, the administration then chose to defame me and more importantly the FBI by saying that the organization was in disarray, that it was poorly led, that the workforce had lost confidence in its leader. Those were lies plain and simple. And I am so sorry that the FBI workforce had to hear them and I’m so sorry that the American people were told them.”

Later, during questioning, Sen. Angus King asked, “In his interview with Lester Holt on NBC the president said, ‘I had dinner with him. He wanted to have dinner because he wanted to stay on.’ Is this an accurate statement?”

“Did you in any way initiate that dinner?,” King asked.

“No. He called me at my desk at lunchtime and asked me, was I free for dinner that night.”