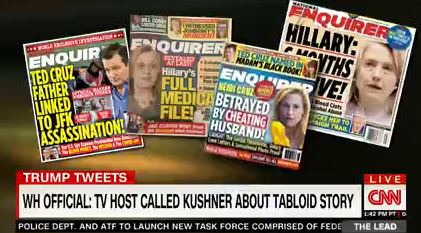 In reporting the story of the claims that Pres. Trump would have spiked a negative story about Joe Scarborough and Mika Brzezinski, CNN’s The Lead mistakenly used a cover of the National Enquirer that doesn’t exist. Page Six first spotted the error which occurred in a story reported by CNN correspondent Jessica Schneider.

During the piece, it showed a cover from the tabloid, which seemed to be about a scandal involving GOP senator Ted Cruz and his wife, Heidi Cruz.

We have reached out to CNN for a response but have not heard back. But an insider told Page Six the matter is being looked into by the network’s Standards & Practices unit.