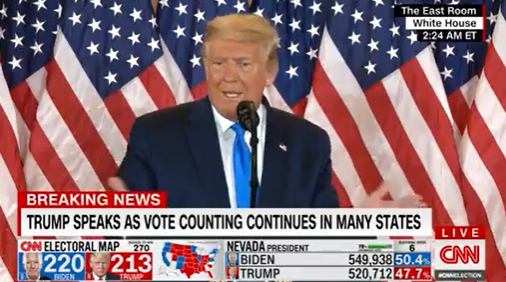 We finish our election night coverage (you can find part one of our live blog here, part two here and part three here) with dangerous and false comments from President Donald Trump, who gave public remarks from the East Room of the White House at around 2:20 a.m. ET on Wednesday, about 1 1/2 hours after Joe Biden gave brief remarks of his own.

As the networks did for vice president Biden, all of the cable news networks aired Trump’s remarks.

“This is without question the latest news conference I’ve ever had,” Trump quipped, in front of what appeared to be a mask-less audience.

Trump went on to make a number of false claims, including that people are trying to steal the election from him, that he has won Georgia and North Carolina (neither race has been called by any national news outlet), that he is winning Pennsylvania “by a tremendous amount” and that the election is “a fraud on the American public.”

He then went on to say, “frankly, we did win this election” and that “we will be going to the U.S. Supreme Court. We want all voting to stop. We don’t want them to find any ballots at 4 in the morning and add them to the list.”

Of course, there are millions of uncounted votes and it is too early to credibly make that claim.

“This is an extremely flammable situation,” said Chris Wallace. “The president just threw a match into it. He hasn’t won these states.”

Brian Williams cut into Trump’s remarks, saying, “We always allow a lot on election night, hyperbole. But when it veers into falsehood, we have not called the states he claimed for victories.”

That’s it for our election night live blog. Have a good night!