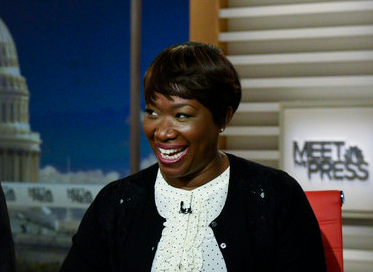 Rumors have been swirling over the past few weeks that Joy Reid was going to be tapped as the next host of MSNBC’s 7 p.m. hour, and the network finally made it official this morning.

“I’m thrilled to have Joy on five nights a week,” MSNBC president Phil Griffin said in a statement. “She’s thoughtful and brings so much depth to her reporting. She’s made for this moment.”

A popular personality among MSNBC viewers, Reid also served as the top fill-in host in prime time for All In with Chris Hayes, The Rachel Maddow Show and The Last Word with Lawrence O’Donnell, and she has hosted the midmorning weekend program AM Joy since April 2016, and is now getting a promotion to 7 p.m.

This move comes one day after MSNBC’s sibling outlet CNBC named a new 7 p.m. host of its own, Shep Smith.

Reid, whose politics skew liberal, is the permanent replacement for Chris Matthews, who left his weekday 7 p.m. perch on March 2. in light of allegations of sexist behavior in the workplace. Since Matthews’ departure, the hour has been fronted by a rotating group of MSNBC hosts, usually Steve Kornacki, Ari Melber (who already anchors the network’s 6 p.m. hour) or Reid.

Until February 2015, Reid hosted a weekday show, The Reid Report, on MSNBC. During that 14-month gap, Reid had been reporting and commenting on the presidential campaign. She joined MSNBC as a contributor in 2011.

Reid’s appointment is significant in a variety of ways. She will join Fox News’ Harris Faulkner as the only African-American female hosts on weekday cable news, and is now one of only four on major national television news, alongside CBS This Morning’s Gayle King and GMA’s Robin Roberts.

“Evening and prime-time news has been a universe of white men really since I was growing up,” Reid told The New York Times yesterday. “For somebody who grew up as a nerdy kid obsessed with news, watching ‘Nightline’ and ‘Meet the Press,’ the idea of being a part of that family has always just been kind of overwhelming.”

Reid will have her work cut out for her.

MSNBC’s 7 p.m. ratings have been mediocre in recent months. Matthews often built on Melber’s 6 p.m. show, The Beat, when it came to total viewers, but that has no longer been the case in the post-Matthews months. It’s hard for network superfans to become attached to a time slot when there’s no permanent host. MSNBC hopes that will now change, and Reid will bring a slightly younger audience to give CNN’s Erin Burnett more of a run for her money in the key adults 25-54 demo.

Plus, MSNBC viewers had become accustomed to opinion, not anchored-news in the hour. Executives undoubtedly hope the progressive Reid will serve as a more successful lead-in for Chris Hayes’ 8 p.m. show, which also has a progressive bent, than hard-news MSNBC Live had. Better ratings for 7 p.m. means better ratings for the rest of the network’s prime-time lineup.

Not long after Matthews’ departure in March, we polled TVNewser readers on who they thought would be his successor in the 7 p.m. time slot, and only 9% of you said it would be Reid. Shep Smith, CNBC’s newest on-air talent, was the most popular choice to take on 7 p.m. (40%), followed by Nicolle Wallace (19.5%), Steve Kornacki (10%), Brian Williams (10%) and then Reid, trailed by a variety of other MSNBC hosts.

Reid found herself in hot water a couple years ago over a series of reports about controversial blog posts in the past. One promoted a 9/11 conspiracy theory in which she wrote, “flying the Mexican flag on U.S. soil strikes me as incredibly presumptuous and insulting to the U.S.,” and another that shows a Photoshopped image of Sen. John McCain as the Virginia Tech shooter. The latter, titled “Baghdad John Strikes Again,” notes the 2008 GOP presidential nominee’s statement that he would “follow Osama bin Laden to the gates of hell.”

Back in the mid-2000s, Reid claimed in an blog post, mockingly, that former Florida Governor Charlie Crist, was gay. She also wrote about opposing gay marriage, stating that “most straight people cringe at the sight of two men kissing” and that “a lot of heterosexuals, especially men, find the idea of homosexual sex to be … well … gross.”

Reid later apologized for her blog, both on her show and in a separate statement in 2018: “While I published my blog, starting in 2005, I wrote thousands of posts in real time on the issues of the day. There are things I deeply regret and am embarrassed by, things I would have said differently and issues where my position has changed. Today I’m sincerely apologizing again.”

She would also make the bizarre claim that homophobic posts on her old blog were planted by hackers, and that her lawyer said the FBI was investigating the alleged hack. It’s unknown if anything ever came of that investigation.

Asked by The New York Times on Wednesday if she still believed she had not written the posts, Reid said: “It’s two years ago, so I don’t spend a whole lot of time thinking about that old blog. What I genuinely believe is that I truly care about the LGBT people in my own life. I care about being a good ally, a good person, and making sure that my voice is authentic, that I can make a difference.”