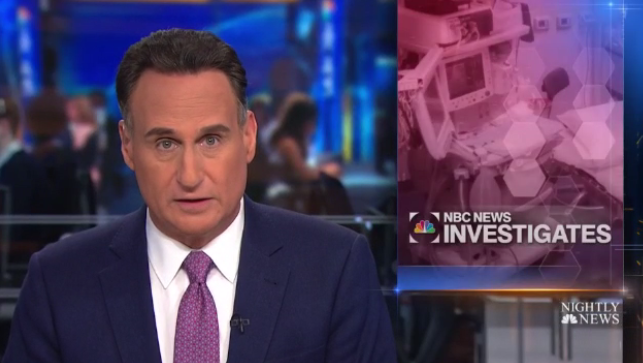 NBC News is one of 58 media outlets partnering with The International Consortium of Investigative Journalists on a new probe into the use of medical devices, both in the U.S. and globally.

The ICIJ, an organization previously known for having “produced the Panama and Paradise Papers investigations,” partnered with more than 250 journalists in 36 countries in this effort to examine how devices are tested, approved, marketed and monitored.

While medical devices provide positive benefits for Americans and people around the world, ICIJ’s reporting has been raising questions about whether the device industry is putting patients at risk of serious injury in its quest for profits.

NBC and the Associated Press are the only two U.S. outlets working with the ICIJ on this global investigation, so far.

NBC News’ Medical Device Dangers is an series featuring a global investigation through ICIJ on problems with medical devices. The series will be featured across NBC News’ properties, including NBC News’ Investigative team along with the medical team, Nightly News, Today, MSNBC, the network’s new streaming news service, Signal (which will produce a show around the series).

NBC’s first report for the investigative series –Exporting Pain– aired on the Saturday edition of NBC Nightly News with José Díaz-Balart. The report found that there are some U.S.-made medical devices have caused serious injuries and pain for its users overseas.

NBC Nightly News with Lester Holt and Today will have new stories early this week, including a report on the use of controversial medical devices for breast implants that’s slated to air Monday night on Nightly, and a report on hip replacements that will air Tuesday on Today.

FDA commissioner Dr. Scott Gottlieb appeared on CNBC Squawk Box this morning to talk about how the FDA is now revamping their 40-year-old clearance procedures for medical devices. His on-air appearance came the day after the ICIJ/NBC News announcement was made official. Coincidence?

Not necessarily. Gottlieb told CNBC’s Becky Quick the FDA had planned the changes ahead of the stories.

The FDA’s agenda on medical device safety, drug prices and vaccines from CNBC.