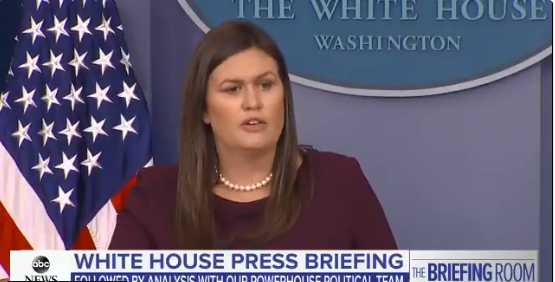 As expected, White House press secretary Sarah Sanders fielded a number of questions concerning Omarosa Manigault Newman‘s new book, Unhinged, which she has promoted on Meet the Press, Today, PBS NewsHour, CBS This Morning, and MSNBC over the past 2.5 days. She’ll also be on The Daily Show with Trevor Noah tonight.

ABC News chief White House correspondent Jonathan Karl kicked things off by asking Sanders about the tweet below, and if it’s appropriate for a president to refer to an American citizen as “a dog.”

When you give a crazed, crying lowlife a break, and give her a job at the White House, I guess it just didn’t work out. Good work by General Kelly for quickly firing that dog!

Sanders said that President Trump was just “voicing his frustration with the fact that this person has shown a complete lack of integrity, particularly by the actions following her time here at the White House.”

“The President wanted to give her a chance,” Sanders said, “and he made clear when General Kelly came on and he voiced concerns that this individual didn’t have the best interests of the White House and the President and the country at heart, the President said do what you can to get along. If you can’t, he gave him full authority to carry out the decision to let her go.”

Sanders is asked if the president is racist. Among those he has attacked on Twitter include a number of prominent African-Americans, including CNN’s Don Lemon, LeBron James, Rep. Maxine Waters, as well as NFL players for kneeling. Sanders defended the president by saying that he has criticized people of all races over the years, and “fights fire with fire and certainly doesn’t hold back on doing that across the board.”

Sanders was also asked why the president felt it necessary to continuously respond to accusations leveled at him in the book. She answered by placed blame on the media for giving her a platform in the first place.

“Unfortunately, the individuals in this room continue to create a large platform for somebody they know not to have a lot of credibility, for someone they frankly didn’t give her a platform in this White House. It wasn’t until this individual started to negatively attack this president and this administration and try to tear this entire place down that she received the type of platform and rollout that she’s getting. I think it would be great if every single person in this room and every single person in the administration never had to talk about this again.”

NBC News White House correspondent Kristen Welker directly asked Sanders if she has ever heard Trump ever use “the n-word,” or if she can guarantee that the American people will ever her him utter the word on a recording.

Sanders said she could not guarantee that, but she asserted that she has never heard him utter the word, and said the media “hasn’t focused on the policies that this administration and this president are enacting that are helping people not just on the economy, but on school choice, on prison reform, that’s disproportionately affected African-Americans and Hispanics…this is a president governing to help all Americans. I think we will be better off if the media gave that more attention.”

When Sanders tried to cut-off a follow-up question from Welker by calling on Fox News White House correspondent Kevin Corke, the Fox Newser ceded his question to Welker to let her follow up. The result was another notable quote: “Look, I haven’t been in every single room,” Sanders said. (Corke did get another chance to question Sanders later in the briefing).

White House reporters are increasingly deferring to each other for follow-ups in recent months. The Hill’s Jordan Fabian ceded his question to NBC News chief White House correspondent Hallie Jackson last month. Before that, CNN’s Kaitlan Collins paused to allow Jackson to continue her questioning as well.