NEXT:Revenue at Fox News, CNN and MSNBC Up Nearly 20 Percent
PREVIOUS:Kathy Griffin Calls CNN Firing 'Hurtful,' Says Even Her Mother Won't Talk To Her 'Because She's In Love With Tucker Carlson' 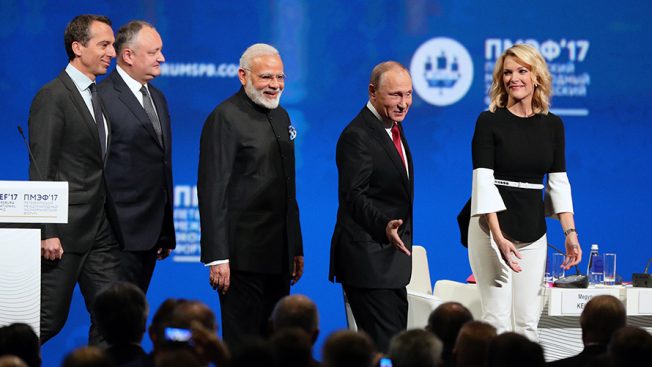 Russian President Vladimir Putin once again denies any Russian government role in the hacking of the 2016 U.S. election saying even Megyn Kelly‘s 6-year-old daughter could have hacked the race.

During the panel discussion, Putin again denied that Russia interfered in last year’s U.S. election, saying to Kelly that even her “underage daughter” could have been behind the hacking.

“IP addresses can be invented, a child can do that! Your underage daughter could do that. That is not proof,” Putin said. Kelly is a mother of two sons and a daughter: 7-year-old Yates, 6-year-old Yardley, and Thatcher who turns 4 next month.

Kelly will also get a one-on-one interview with Putin later today, which will air on Sunday Night with Megyn Kelly, which premieres this Sunday at 7 p.m. ET.

It has been a whirlwind of a month for Kelly, who began at NBC News on May 1. Putting together a prime time show in such a short amount of time has been no small feat, as explained by Sunday Night co-executive producers David Corvo and Liz Cole.

“When we announced Megyn joining NBC News, we started working on the show immediately,” Cole tells TVNewser. “We tried to explore interviews for her and began working on stories that we were confident would work. When she arrived, we went over everything we had, and where we were headed.”

Success won’t be defined solely by ratings performance. “We will be looking at the mix of stories, the way we execute each report and the overall feel of the program,” Corvo tells TVNewser.

Before she left for Russia, Kelly told us what she hopes to deliver with the new program: “The show is going to be longer-form journalism, with big interviews and investigations. We’re going to take viewers to places they’ve never been, and we’re going to do it with heart and with humility. I think people will go on an emotional journey. I think they’re going to learn things that will be rather explosive.”