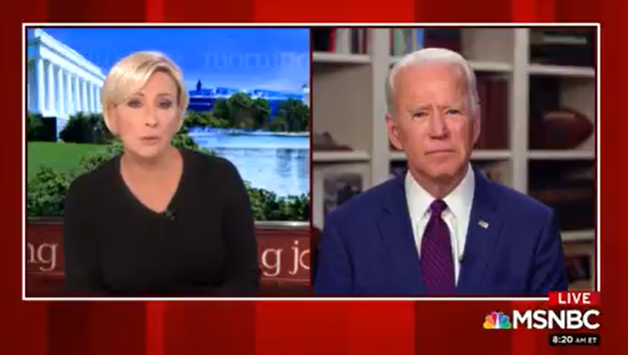 Former vice president Joe Biden appeared on MSNBC’s Morning Joe earlier today to address the allegation of sexual assault made against him in March by former Senate staffer Tara Reade.

According to Reade, the then-Delaware senator sexually assaulted her in a Senate corridor in 1993.

The former vice president vehemently denied the allegation during a live interview this morning with co-host Mika Brzezinski.

“This never happened, and when she first made the claim, we made it clear that it never happened, and it’s as simple as that,” Biden said, later adding, “I’m not going to question her motive. I don’t know why she’s saying this. I don’t know why after 27 years all of a sudden this gets raised. I don’t understand it. She has a right to say whatever she wants to say. But I have a right to say: Look at the facts.”

The allegation being leveled at Biden comes as the presumptive Democratic party nominee is preparing to take on President Trump in the November presidential election. More than a dozen women have leveled allegations of sexual harassment against Trump over decades. Trump has always denied those allegations made against him, and the president has been careful in speaking about the allegation leveled at Biden.

As part of the interview, Brzezinski brought up the former vp’s past comments on sexual assault allegations that had been made against then-Supreme Court nominee Brett Kavanaugh.

In September 2018 during the Kavanaugh hearings, Biden said: “For a woman to come forward in the glaring lights of focus, nationally, you’ve got to start off with the presumption that at least the essence of what she’s talking about is real, whether or not she forgets facts, whether or not it’s been made worse or better over time.”

An excerpt from today’s interview:

Brzezinski: “Is the essence of what she [Reade] is saying real? Why do you think she’s doing this?”

Brzezinski then brought up Dr. Christine Blasey Ford, the woman who accused Kavanaugh of harassment, and how most prominent Democrats, especially the most powerful women in Congress, expressed the sentiment, “believe all women.”

Brzezinski: “As it pertained to Dr. [Christine Blasey] Ford, high-level Democrats said she should be believed, that they believed it happened. You said, if someone like Dr. Ford were to come out, the essence of what she is saying has to be believed, has to be real. Why? Why? Why is it real for Dr. Ford, but not for Tara Reade?”

I don’t know what else I can say to you.”

Brzezinski: “I’m going to try to ask many different ways. [Former Georgia gubernatorial candidate] Stacey Abrams said during the Kavanaugh hearings, ‘I believe women, I believe survivors of assault should be supported and the voices heard.’ [New York senator] Kirsten Gillibrand tweeted, ‘Do we believe women? Do we give women an opportunity to tell their story? We must be a country that says yes every time.’ They now both support you. [House speaker] Nancy Pelosi falls into this category too, as well as many other leaders in the Democratic party. Are women to be believed unless it pertains to you?”

Biden: “Look, women are to be believed, given the benefit of the doubt. If they come forward and say something that they said happened to them, they should start off with the presumption that they’re telling the truth. Then you have to look at the circumstances and the facts. And the facts in this case do not exist. They never happened.”

Biden’s campaign released a statement this morning, at around the time the interview was taking place.

“While the details of these allegations of sexual harassment and sexual assault are complicated, two things are not complicated. One is that women deserve to be treated with dignity and respect, and when they step forward they should be heard, not silenced. The second is that their stories should be subject to appropriate inquiry and scrutiny.

Responsible news organizations should examine and evaluate the full and growing record of inconsistencies in her story, which has changed repeatedly in both small and big ways.
But this much bears emphasizing. She has said she raised some of these issues with her supervisor and senior staffers from my office at the time. They—both men and a woman—have said, unequivocally, that she never came to them and complained or raised issues. News organizations that have talked with literally dozens of former staffers have not found one—not one—who corroborated her allegations in any way. Indeed, many of them spoke to the culture of an office that would not have tolerated harassment in any way—as indeed I would not have.”

In his statement, Biden also called for the National Archives to “identify any record of the complaint she alleges she filed and make available to the press any such document. If there was ever any such complaint, the record will be there.”