NEXT:Thursday, Sept. 2 Scoreboard: Tucker Carlson Tonight, The Five, Hannity Round Out Top 3
PREVIOUS:CBS News Chief Neeraj Khemlani on the CBS Mornings Rebrand: 'We're Not Changing Who We Are. We're Actually Doing More of What We Do Best' 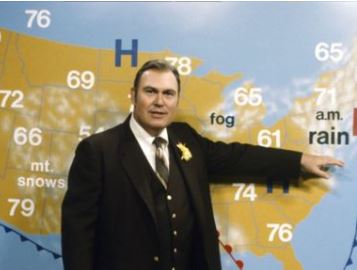 The iconic Today show weatherman Willard Scott has passed away. His protégé Al Roker announced the news on his Instagram page.

Scott, 87, was an NBC legend. He started out as a page at WRC-TV (the NBC affiliate in Washington, D.C.), in 1950.  In the 1960s he was McDonald’s very first clown, then called Donald McDonald. He went on to become the weatherman at WRC in the 1970s, and moved to the network in 1980 to become weatherman for Today show. In 1983, he began his popular centenarian birthday greeting segments on the morning show (which later became sponsored by Smucker’s).

Scott officially retired from TV news at the end of 2015, completing a 35-year run on NBC’s morning show.

Tributes from a few of his friends:

I am heartbroken that the much loved Willard Scott has passed away. He played such an outsized role in my life & was as warm & loving & generous off camera as he was on. Willard, you didn’t make it to the front of the Smucker’s jar, but you changed so many lives for the better.♥️ pic.twitter.com/aePQnZxf5O

My longtime friend in the DC bureau, a ray of sunshine no matter what the weather or how grim the news. Beloved by fans and colleagues alike: Willard Scott, legendary TODAY weatherman, dies at 87 https://t.co/g4Iyep9k2S via @TODAYshow

We lost Willard Scott passed peacefully at 87 surrounded by family, including his daughters Sally and Mary and his lovely wife, Paris. He was truly my second dad and am where I am today because of his generous spirit. Willard was truly a broadcast #icon pic.twitter.com/uqKX3jcc8P