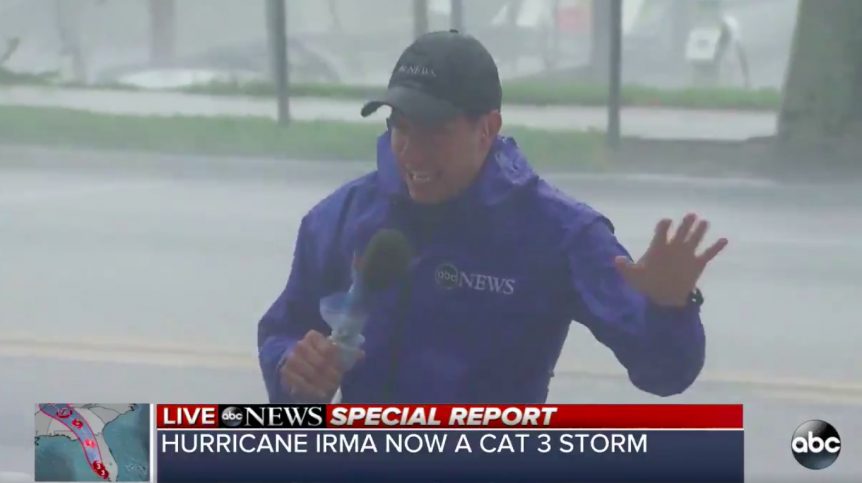 “Now things get quite serious,” said the Weather Channel meteorologist Mike Bettes as he stood in Naples just after 4 p.m., 25 minutes after Irma made its second landfall of the day in Marco Island.

“This is it. This is really the beast that is Irma,” he said, assuring viewers why he was out there: “We like to be out here and show you the pictures. This is what we do as meteorologists to communicate the threat that is happening.

Weather Channel, along with CNN, FNC and MSNBC remain in rolling coverage. ABC has been the only broadcast network on since 6 a.m. George Stephanopoulos anchored until 2 p.m. when Elizabeth Vargas and Dan Harris picked up. Vargas and Stephanopoulos will be back at 7 p.m. for a 20/20 special after David Muir anchors World News Tonight.

“I want to reassure the audience that Matt’s okay,” said Muir referring to ABC’s Matt Gutman who, while reporting live from Naples, had lost contact for a moment. Muir and Gutman are in Naples where Irma has been roaring overhead.

“This is like a firehose on steroids,” added ABC’s Tom Llamas 40 miles to the north in Ft. Myers as he braced himself from the wind and rain.

WATCH: With Hurricane #Irma about 10 miles from Naples, FL, @DavidMuir shows the force of the wind bending trees: https://t.co/wOnieJq2kZ pic.twitter.com/Oa2UtxQaFc

“It’s whiteout conditions here,” said storm chaser Scott Peake on The Weather Channel from Marco Island, as Irma’s northern eye wall passed over. “It’s like being in a blizzard, but it’s rain. I can’t see 20 feet in front of me.”

“This came off one of the palm trees,” said Kerry Sanders on MSNBC holding a 25-pound palm frond as the storm roared through Naples. “I’m going to go dump it in a place where the wind isn’t.” 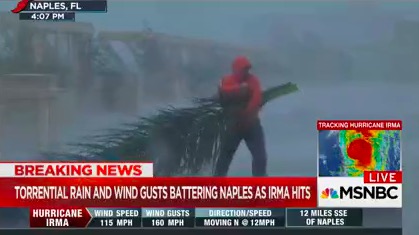 Over on Fox News, Steve Harrigan is covering Irma, on his his birthday. “What are you going to do on your birthday, go to a ball game, maybe hang out with the family or do you want to be on the leading edge of the eye of Hurricane Irma standing in the water in Naples, FL and talking to moron Shepard back in New York? Steve, thank you for choosing the latter,” said Smith.

Jim Catsos rode out the storm at his home on Marco Island. “Hi Shep. Big fan,” he said phoning into Fox. “It turned out better than it could have been,” he said, adding, “But I hear the bad part is coming. So I could end up eating those words. This is a doozy.”

As of the 5 p.m. NHC update, Irma was downgraded to a category 2 storm. “Love it, love it, love it, that it’s ticking down,” said Bettes as he was told the news, even as he got blown around in Naples.

Store owners in #Miami watch as their store is surrounded by a wall of water. What a terrible and uneasy feeling. #HurricaneIrma #Irma @WFLA pic.twitter.com/F0wALvDpJz