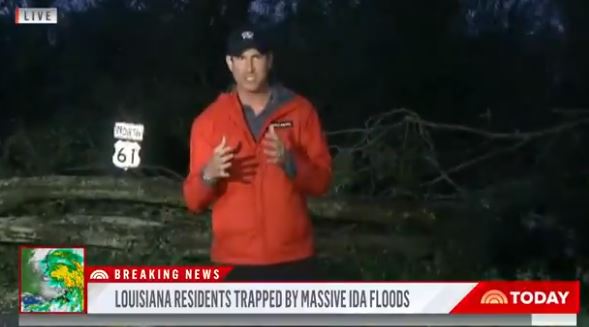 Hurricane Ida punished Southern Louisiana and the Gulf Coast on Sunday as a category 4 hurricane, and has now been downgraded to a tropical storm as of Monday morning.

Ida is about 65 miles south, southwest of Jackson, Miss., with maximum sustained winds of 45 mph moving at 8 mph, as per a 7 a.m. CDT update from the National Hurricane Center.

Tropical Storm #Ida in Jackson, MS right now.
The worst of it is still south of here.#mswx #HurricaneIda pic.twitter.com/W035u6c4T9

The powerful storm has left New Orleans and most of southeast Louisiana without power.

“There’s over a million customers, right now, without power,” said FEMA administrator Deanne Criswell, who appeared on the morning shows Monday to provide updates. “I think people should be prepared for several weeks before full power restoration comes on. You know, we’re not going to be able to tell you exactly where it’s going to come on first.”

Correspondents filed reports from the field on Monday for cable and broadcast’s morning programming.

CBS News’ Omar Villafranca reported for CBS This Morning from New Orleans Monday, saying while there’s damage there also doesn’t appear to be widespread flooding like what transpired during Hurricane Katrina 16 years ago.

Villafranca did point out that there has been a lot of flooding on I-10, and that cars were submerged, “and drivers had to be rescued from their vehicles.”

He added: “Power is out, communication is down, and the sun is starting to come back up …”

“We’re not seeing the widespread flooding that we saw after Katrina, it looks for the most part, that the levee system did its job.” — @OmarVillafranca in New Orleans #Ida pic.twitter.com/821HKxDjU5

Vlad Duthiers reported for CBS This Morning Monday from Albany, La, a small town east of Baton Rouge. There are a lot of downed trees and power trees that have blocked the roads there.

“I got everything but power,” one homeowner tells @VladDuthiersCBS following Hurricane #Ida in Albany, Louisiana. pic.twitter.com/3dsYqTKueH

ABC News’ chief meteorologist Ginger Zee also reported from New Orleans. Yes, the city has been hit hard by Ida, but parishes to the west and south have been hit even harder.

.@Ginger_Zee says Ida tied the record for the strongest hurricane to ever hit Louisiana and stayed a major hurricane for 8 hours. https://t.co/ieJf4DR2yW pic.twitter.com/IqhSSzArGu

“I look all around, and we can hear the sound of generators,” Al Roker said from New Orleans at 6 a.m. local time. “It’s breezy and the rain has stopped, but of course we have a lot of devastation and we don’t know until the sun comes up what we are going to see…”

He added that EMS isn’t available, “Communications are down, and it is a disaster right now.”

NBC correspondent Sam Brock was previously reporting from LaPlace, which has been hit harder than New Orleans. It’s roughly 30 miles west of the city. However, he had to leave the area “because there was not enough service to report live from what I was seeing.”

Tom Llamas has been down in New Orleans to cover the hurricane for NBC News. With Lester Holt on vacation, Llamas will also anchor Nightly News from New Orleans Monday.

Ran into a power crew getting ready to assess the damage and start repairs in New Orleans. Their manager made one thing very clear to the dozens of linemen listening: “this is going to be a marathon.” #ida #nola @EntergyNOLA 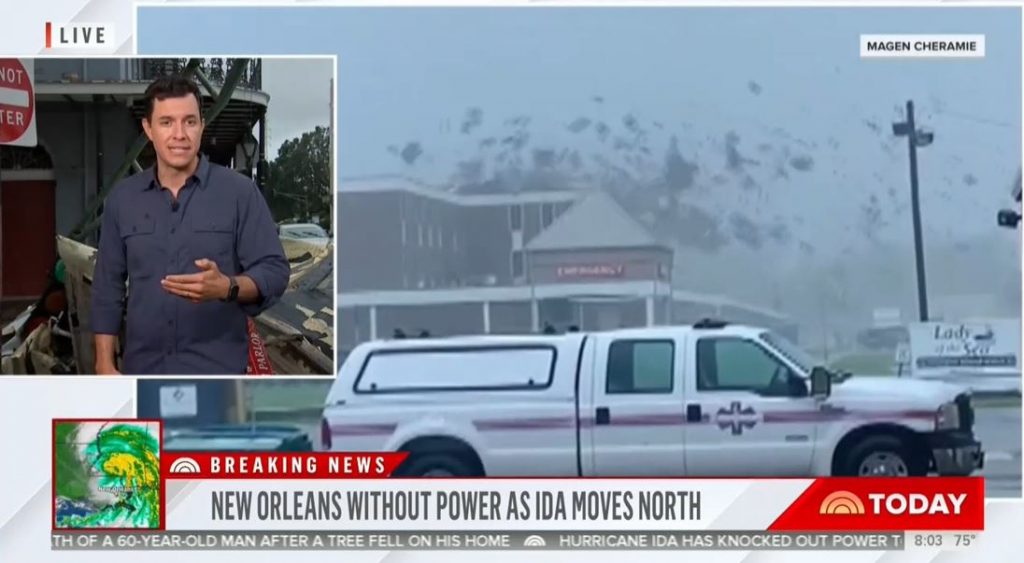 Derek Van Dam is on the ground in Houma for CNN. Included is the link to his report for Early Start, where he checks in at 4:30 a.m. local time.

Houma is in far worse shape than New Orleans.

“In our immediate vicinity, the winds have been the major story here. The wind factor will be catastrophic as we get first daylight in the coming hours,” Van Dam reported.

He added that there have been “very scary” moments not only for his team, “but also for the people who seek shelter here. You can imagine the people who don’t have sturdy concrete reinforced window buildings within the Terrebonne Parish, where I’m located — what they went through and what they’re going to be waking up to this up to this morning. The sounds of generators humming in the background, all too familiar from previous hurricane chases.”

Here in #Houma #Louisiana we anticipated a break from the relentless CAT4 winds as the center of #Ida was forecast to cross over us. It never happened. The storm slowed & pivoted overhead and left us in the eyewall for hours. I fear what we may see in daylight @CNN @CNNweather pic.twitter.com/9xbU1mpCL7

As the sun comes up in New Orleans, the damage we’re seeing is devastating. This building near downtown was toppled in Hurricane Ida. @foxnews #foxnews #hurricaneida #ida #Hurricane_Ida #neworleans pic.twitter.com/LUdIUGxq6e

The video was taken after Paul filed a live report for Fox & Friends Monday, telling viewers that more than one million people are out of power in Louisiana and Mississippi.

Fox Weather multimedia journalist Will Nunley checked in to Fox & Friends later in the broadcast, reporting on the damage and flooding from what has now become “Tropical Storm Ida” in Pass Christian, Miss.