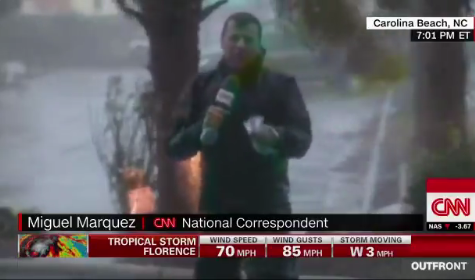 At the 8 p.m. ET update, Florence is 15 miles northeast of Myrtle Beach, S.C. The center is moving into extreme eastern South Carolina, and life-threatening storm surges and strong winds will continue this evening.

Maximum sustained winds are at 70 mph (from 75 mph this afternoon), with the storm moving west at only at 3 mph.

According to the NOAA, catastrophic freshwater flooding is expected over portions of North and South Carolina.

A lot has happened since this afternoon. For one thing, a massive tree landed on a house: 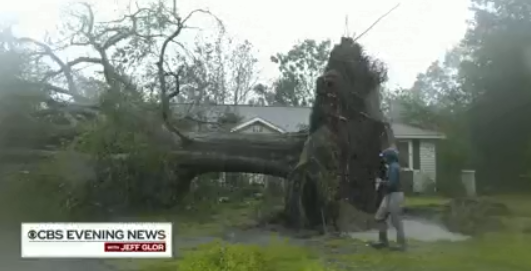 And we must have missed this one earlier in the day:

Very strange to see a wind gust put a tree back IN PLACE! pic.twitter.com/RI1G7LEfcU

CNN’s Miguel Marquez checked from Carolina Beach, N.C. for Erin Burnett Outfront. Things don’t seem to be improving in his neck of the woods.

“It is amazing how this storm will just not quit … this is now 24 hours into this event … we are seeing wind that will not relent.” – @MiguelMarquez, in Carolina Beach, NC https://t.co/Tl2OI6wZ61 pic.twitter.com/4CLE4FKJOw

“Just because the storm has passed us, doesn’t mean we’re out of the woods just yet,” Atencio told Nicolle Wallace.

WATCH: the water in Oak Island, NC rising by the minute.

Thank you @NicolleDWallace for being our mother hen @MSNBC #HurricaneFlorence2018 pic.twitter.com/nQuVIATLyP

Jonathan Hunt reporting for The Story with Martha MacCallum from Myrtle Beach, and said that most people “have heeded the warnings to get out, and that’s a very good thing as we face a long week here.”

Each of the evening newscasts originated from Wilmington, N.C. this evening:

“Tonight we’re seeing the first casualties of this powerful storm,” said NBC Nightly News anchor Lester Holt. “At least five people across North Carolina have died including a mother and her 8-month-old baby killed inside their own home by a downed tree in Wilmington. We were there during the heart wrenching hours as firefighters and first responders rushed to try to save their lives, as massive trees uprooted across the region crashing into streets and homes, firefighters knew that calls like this would be inevitable this morning.” 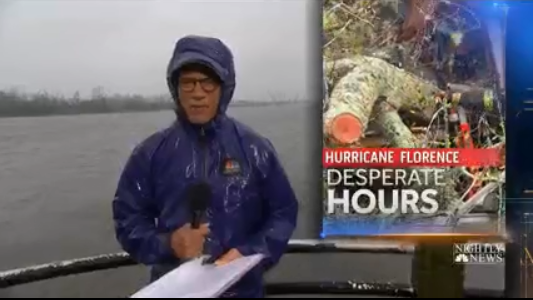 “Hurricane Florence makes landfall. we were on the air as hurricane Florence slammed ashore, and quickly turned deadly,” said ABC World News Tonight anchor David Muir. “The storm churning at this hour. Million still bracing; the terrifying scene; water rising so quickly, families trapped inside their homes and apartments and apartments calling 911; dispatchers telling them to get to the second floor, get to the attic. Our team right there.”

“And here in Wilmington, we’re on the scene; a mother, an infant killed, the father pulled out, the firefighters, and the prayer outside…in the dark, more than a half million without power and growing. and now, the new warnings. flash flooding and tornadoes possible in the coming hours,” Muir continued. 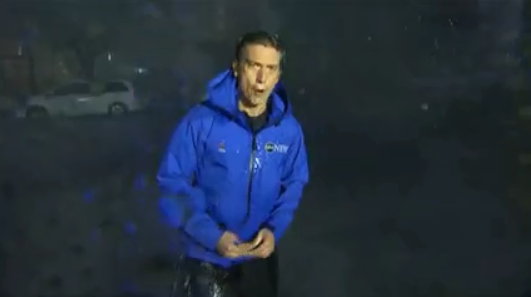 ABC World News Tonight and NBC Nightly News went to regularly scheduled programming in most markets at 7 p.m. ET, while CBS Evening News with Jeff Glor stuck around outdoors for an expanded, one-hour edition of the newscast despite the horrific weather.

“I am standing in a parking lot that for much of the day was part of the swollen cape fear river as we talk about the historic rains associated with Florence,” said Glor, who was reporting from Wilmington. “Florence came ashore this morning as a category 1 hurricane with 90-mile-an-hour winds, 10 miles east of here, in Wrightsville Beach. It has been downgraded now to a tropical storm, but it’s not going anywhere fast. The  governor called Florence, “an uninvited brute who doesn’t want to leave.”

“Florence is now blamed for at least five deaths. nearly a million homes and businesses lost power, so this will be a night in the dark for a lot of people in the carolinas,” Glor continued. 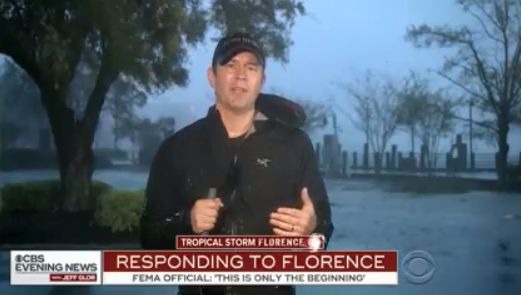 And the video that’s got everyone talking. Below, a Weather Channel correspondent having a tough time standing upright while filing his report. Then, there are two pedestrians perhaps 50-100 yards away walking down the street seemingly without really any trouble.

So dramatic! Dude from the weather channel bracing for his life, as 2 dudes just stroll past. #HurricaneFlorence pic.twitter.com/8FRyM4NLbL

In all seriousness though, no network covers inclement weather quite like The Weather Channel, and this has been the case once again over the past few days with Hurricane Florence. Not only that, but it’s also quite likely TWC will rank at or near the top of the basic cable ratings rankings among adults 25-54 when weekly Nielsen numbers are released next Tuesday.

“This area of the East Coast has not seen a storm like this in a long time and millions of people will have their lives disrupted and face the possibility of catastrophic flooding that could go on for days,” Wendy Fisher, ABC News vp, newsgathering, told TVNewser. “We are deploying extraordinary resources including many teams to cover every angle, including the federal government’s response, and using the latest technology to transmit and tell this important story 24/7 across ABC News.”

CNN will have anchors and correspondents positioned throughout the region and will provide extensive coverage of Hurricane Florence and its after effects.

NBC News and MSNBC correspondents will report from locations across North Carolina, South Carolina, and Virginia as the storm progresses including:

Today and through the night, MSNBC continues to provide around-the-clock coverage as the storm moves inland:

Carolina Rosario will be assigned to work for Univision’s weekly newsmagazine Aqui y Ahora this weekend.