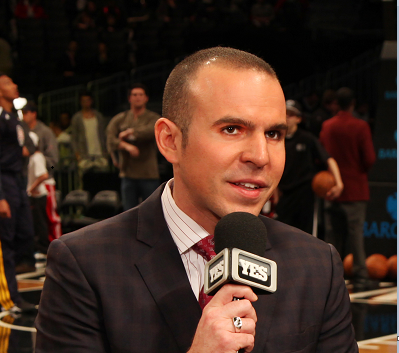 “If you look in my 5th grade yearbook, you will read: ‘Career goal: Be the Yankees announcer.'”

Ryan Ruocco is roughly 20 years removed from 5th grade, but the Dutchess County, NY native is realizing his childhood dreams.

Ruocco, 30, is well-known among New York sports fans for his presence on YES Network. He is a play-by-play man for the NBA’s Brooklyn Nets on YES. He is also a studio host for YES’s coverage of the New York Yankees, and occasionally calls Yankees games on the network. But Ruocco isn’t exclusively a YES man. He is becoming a household name on the national stage, serving as a play announcer for the NBA on ESPN, and ESPN’s WNBA broadcasts (he called the WNBA Finals this past season). 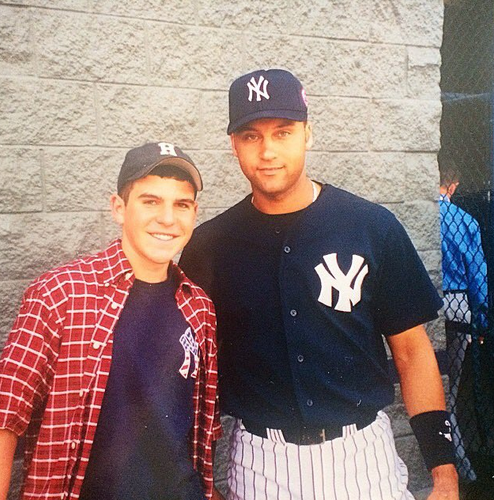 In fact, you can see Ruocco on ESPN tonight calling the Golden State Warriors-New Orleans Pelicans game in prime time.

We spoke with Ruocco yesterday, and he gave us insight into his meteoric rise through the rough and tumble world of sports broadcasting. We also got his thoughts on how on-air talent should handle their use of social media. 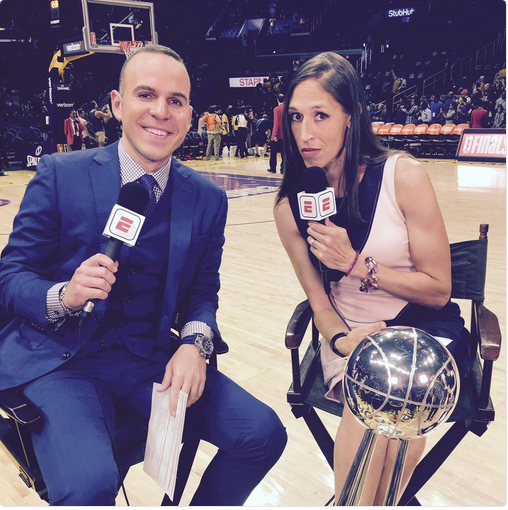 TVNewser: You cover multiple sports for two networks, one regional and one national. Does the way you prepare for a broadcast differ by network or sport?

Ruocco: It differs by sport. For baseball, one of the key components of my preparation is the time I spend in the clubhouse talking with players, and getting stories. I use info from those conversations during the broadcast because there is so much downtime in a baseball game. The broadcast is only going to have roughly 15 minutes of action, and the rest will be conversational and storytelling designed to inform and entertain the audience. That’s a huge part of my preparation for baseball. When I’m doing NBA or WNBA games, whether it’s for YES or for ESPN, much of the broadcast is consumed by calling the actual action. I have stories prepared, but there’s far less time for storytelling than in baseball. My baseball and basketball broadcast prep are similar in that I always want to know what has been going on with the teams in the days leading up to that broadcast, especially when I am calling national games. I never want the audience of a national game to feel like this play-by-play man is just parachuting in from the New York market. I want to be caught up to date on what’s going on with the Warriors and Pelicans when I call their game on ESPN just like I do when I’m following the Yankees and Mets in New York. 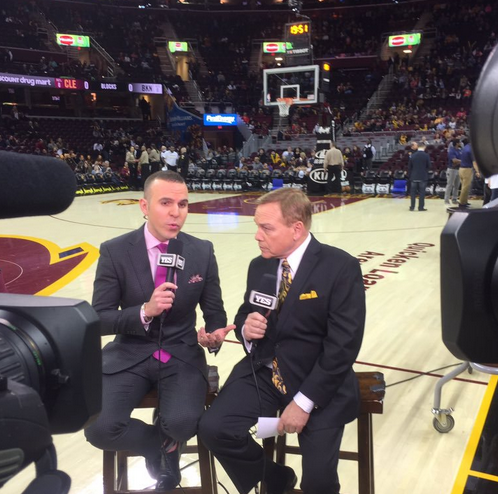 TVNewser: Talk about your early days as a sportscaster.

Ruocco: I’ve always wanted to do this. When my dad and I used to watch games, I would pay attention to the announcers. I had guys I liked who had different methods that just connected with me. I went to Loyola Maryland for my first year of college and had a radio show there. I wanted to transfer closer to home and a friend told me, “Fordham University has an amazing radio station, you should look into it.” When I visited Fordham, I met Bob Ahrens, who was ep of WFUV Sports. He told me that if I came to Fordham and WFUV, I would have the opportunity to be the station’s beat reporter for the Yankees. The opportunity to be in the Yankees clubhouse sold me almost immediately. Then, just being in New York, I had access to so many professionals and made so many connections. Being in the clubhouses, in the locker rooms, and getting to know New York sports journalists like Sweeny Murti, Jack Curry, and Michael Kay was fantastic. At Fordham, we had workshops where sportscasters like Mike Breen, Ian Eagle, Dave Simms, Gary Cohen would come in and listen to our tapes and give us feedback. They would do this not just to make us better, but also to make us more confident. I believe the only way to really receive feedback properly is to have a foundation of confidence and belief. I’ll never forget one of my early workshops was when [SNY New York Mets play-by-play man] Gary Cohen was listening to my tape. After it was over he asked me, “did you play?” I said played baseball in high school, but not professionally. He said, “Well you have the rhythm of the game in your voice, you can really do this. I hope you know that.” That was a foundational piece of confidence I needed to hear. If I hadn’t gone to Fordham, I wouldn’t have gotten that boost. I’ve just been very blessed and fortunate to get to do what I love to do for two networks that I really love working for. 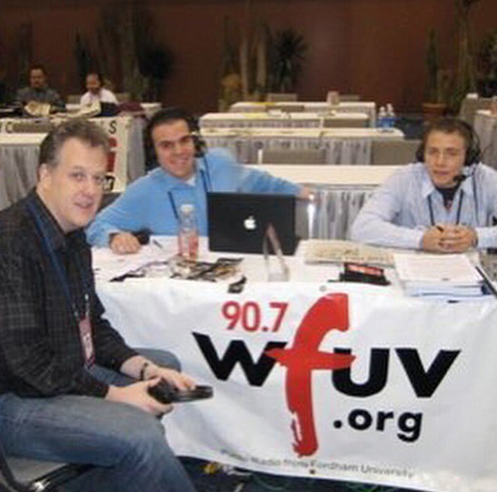 TVNewser: Name some of your mentors in this business. 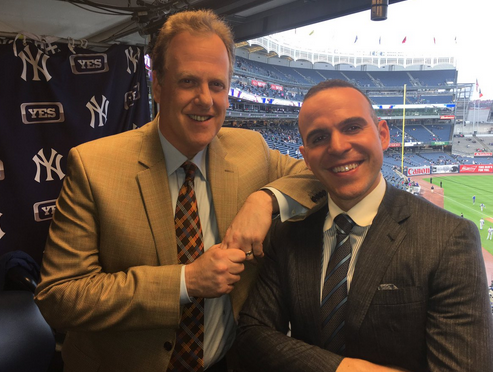 TVNewser: I want to ask about social media use by on-air TV talent. It’s a hot topic right now. I’m not interested in politics, but I do want to know if you’re in favor of talent expressing their opinions on social media, or not so much?

Ruocco: I think it depends on what your job is, and maybe what your higher-ups are looking for you to achieve with your specific role at the company. For example, I do not think it benefits a play-by-play guy to be opinionated on Twitter. It’s why you see very few of them on there at all. Now, I think if you’re doing opinion-based work, maybe it does serve your purpose to share your opinions on Twitter, or maybe it doesn’t. I think that’s something you maybe need to decide with your employer and amongst yourself. That’s something that should be decided as a unit. What is your purpose for being on the network? Or what is your purpose for sharing the comment and what is the reasoning behind it? Is that something you believe in, is it something your employer believes in, or is it not? Then you make that decision. 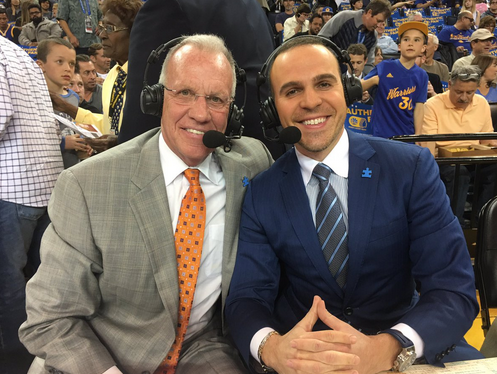 TVNewser: What are some of your hobbies when you aren’t flying across the country calling games?

Ruocco: I’m a big family guy. I love spending time with my nephew. I love the food scene in New York. “Foodie” seems like a cliché term, but I guess you can call me that. I love to workout. Even though I’m traveling all the time for work, I love traveling for leisure too, when I can. Anytime I can get to Italy, that’s the move for me. If I ever end up focusing on just one sport, I will spend several weeks in Italy during that off season!

Hey @JLin7 my nephew is ready for the season man. @BrooklynNets pic.twitter.com/wYDkIy29ga