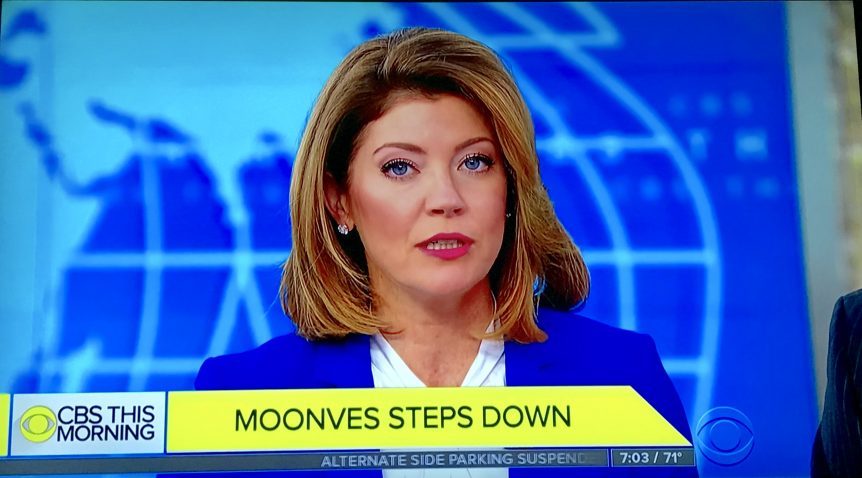 CBS This Morning once again found itself kicking off its broadcast by reporting on the fallout from sexual harassment allegations against a powerful figure at its own company. This time around, it was the Sunday night exit of CBS Corp. chairman and CEO Les Moonves, who is leaving the company he joined in 1995 in the wake of a second New Yorker story, published yesterday, which contains new allegations of sexual assault and harassment from six additional women.

That’s in addition to the six women who leveled sexual misconduct allegations against Moonves in Ronan Farrow’s first New Yorker story about Moonves, back in July.

After Jericka Duncan’s report on the Moonves news, Norah O’Donnell made her first public comments about Moonves’ exit: “This is really hard. It is. This is hard for everybody at CBS News,” she said. “The most powerful media executive in America has now resigned in the wake of this #MeToo movement, and he’s my boss. Or, he was my boss, and so that makes it really hard to comment on it.”

She continued, “Les has always treated me fairly and with respect. Still, for me, it’s been another sleepless night thinking about this. The pain that women feel, the courage that it takes for women to come forward and talk about this. I really didn’t know what I was going to say this morning.”

O’Donnell said she had been talking and texting with Gayle King, who is on vacation today, and the situation reminded them of talking last November about the then-suspension of their co-anchor Charlie Rose after sexual harassment allegations against him, which led to his firing. She said King told her, “Yeah, but I didn’t think we’d still be the story in September.”

When discussing Rose in November, O’Donnell said at the time,“This is a moment that demands a frank and honest assessment about where we stand and more generally the safety of women. Let me be very clear. There is no excuse for this alleged behavior.”

She referenced those comments again this morning: “Here’s what I said back then, and I think it still holds and I want to say it again. There is no excuse for this alleged behavior. It is systematic and it is pervasive in our culture. And this I know is true to the core of my being: women cannot achieve equality in the workplace or society until there is a reckoning and a taking of responsibility.”

O’Donnell concluded, “I’m really proud to work here at CBS News. This has hurt morale, but there are some really, really good people who come to work every single day. As a journalist, I’m confident that the truth is going to come out, because this is being investigated [by two independent firms hired by CBS]. This has to end … and this story will continue.”

Here’s the video of O’Donnell’s comments: