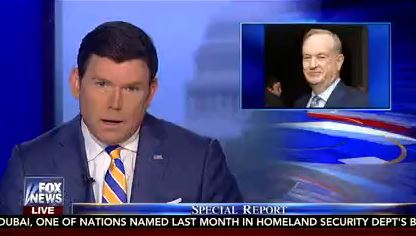 “You may have already heard,” said Bret Baier during Special Report at 6:16 p.m. Wednesday, “there are some major changes coming to the programming lineup here at the Fox News Channel.”

Two hours later, on his former show, which will be known as The Factor for the next two nights, Dana Perino led with the news: 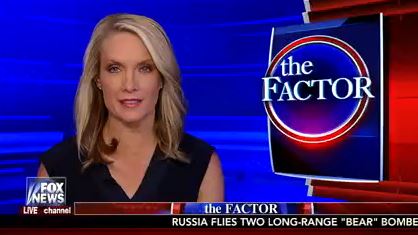 Before we get to the other big stories of the day, we want to address the situation many of you may already be aware of.  Bill O’Reilly, who hosted this program for 20 years is leaving the Fox News Channel. We know that you, his very loyal viewers will have a lot of feelings about this and we will talk more about it later on in the program.

Perino returned with this later in the hour:

Finally tonight, it is the end of an era at the Fox News Channel. As we mentioned earlier, Bill O’Reilly is leaving this chair and this network after more than 20 years. Bill has been the undisputed king of cable news, and for good reason. He is an incredibly talented broadcaster who raised the bar for interviewers everywhere. He has also held his staff to exacting standards in his quest possible program on the air and they are great. And you, his audience, responded in record numbers making The Factor the number one cable news show for more than 16 years. You have also been loyal and we can’t tell you how much that means to everyone on The Factor. In a memo to the staff today, Rupert, James and Lachlan Murdoch, who run Fox News, described Bill this way. ‘By ratings standards, Bill O’Reilly is one of the most accomplished TV personalities in the history of cable news. In fact, his success by any measure is indisputable.’ We wish him the very best. I’m Dana Perino, thanks for watching us, I’ll be here again tomorrow, have a good night.