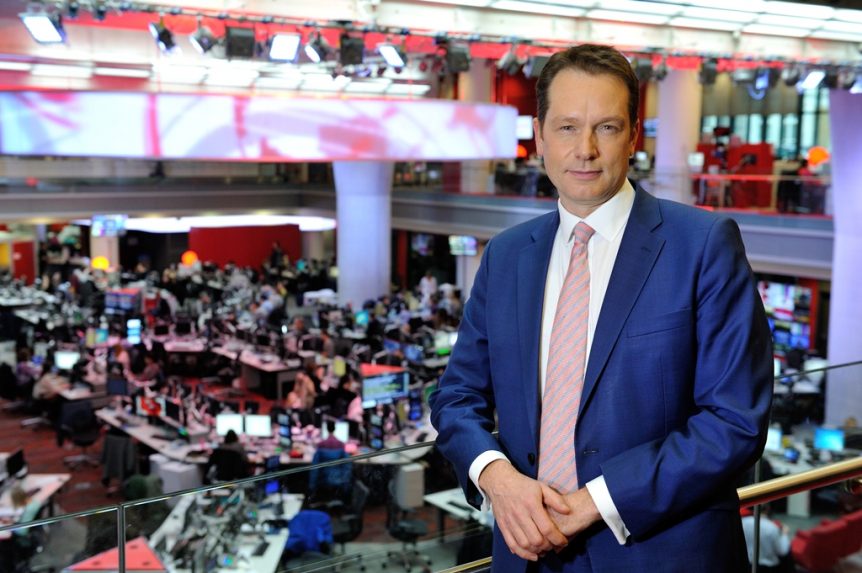 The University of Missouri’s Reynolds Journalism Institute published a study earlier this month, the Trusting News project, showing what news sources Americans deem “trusted” versus “not trusted” in an era when trust in the news media is mostly quite low.

Missouri’s Trusting News project worked with 28 newsrooms to collect data from different media audiences from across the U.S, and the final report includes 39 different news media sources, a combination of TV, print and online brands.

This data complied by the Reynolds Institute found that BBC News tied with Reuters as the third-most-trusted news source out of the 39 analyzed in this study.

The Economist was the No. 1 “trusted” brand, while Public television was No 2. Occupy Democrats, BuzzFeed and Breitbart were the top mentions of “not trusted.”

We spoke with BBC Global News chief executive officer Jim Egan to find out why he thinks his brand does so well from a trust perspective.

TVNewser: What is it about the BBC News brand that Americans find so “trustworthy?”

Egan: We were pleased, but not totally surprised by that study. Our internal research as well as the international studies we buy into often put BBC as the “most trusted” international news provider. The way we go about our journalism hasn’t changed much over the 95 years that we’ve been in operation. The basic editorial values that we were founded with, impartiality, independence and accuracy, have stayed with us through our history.

We have an emphasis on news, not views. We don’t have multi-panel rosters of pundits and people offering opinion that goes unchallenged.

Although we are British, we consider ourselves more than anything else to be global, and that’s reflected in our commitment to viewers around the world.

TVNewser: What do Brits think of U.S. TV news networks?

Egan: We have a somewhat limited exposure to them. [It was announced this week that Fox News would be pulled from U.K. cable and satellite providers.] But you get a sense of the ferocity of the context in the news media when you are in the U.S., when you’re flipping between channels on the dial and reading what’s happening online.

TVNewser: How did the recent news gathering partnership between BBC News and CBS News come about?

Egan: I wasn’t directly involved, but I know we had a pictures and content arrangement with ABC for a number of years that served us well. We reached a stage where for no particular reason we decided to have conversations with CBS, which led to a deal. It doesn’t have any impact on our distribution strategy or the brand itself. It’s really just a news gathering deal based around pictures and footage exchange. In time, it may lead to shared arrangements for bureaus around the world. It’s a significant deal, but it doesn’t mark a dramatic change in strategy. I don’t think there’s any sort of big falling out with ABC. We just decided to change things up a little bit.

TVNewser: How does your news organization combat “fake news?”

Egan: We have had a service called “reality check” for a few years, and many other organizations now have those. That idea itself isn’t intrinsically novel, but it’s something that we have been staffing up and doing more of recently. There are some things that we can do ourselves. I also think there are roles to be played by policymakers. The idea of “media literacy” and helping audiences understand how to spot the difference between what’s real and what’s fake. That would be a long term, but important initiative; and to be fair to the social media networks themselves, they are increasingly realizing that it’s not just in society’s interest, but in their own corporate interest to be doing more in this area.

TVNewser: Why should Americans include BBC Global News in their daily news diet?

Egan: Consider the BBC if you’re interested in the world, and America’s place in it. The BBC provides a genuinely global fare of the most important, and the most interesting things happening around the world on any given day. A large part of that is the significant geopolitical events we cover, what’s going on in the business world, as well as what’s happening in sports, technology, culture, etc. If you have no interest in the world outside of your national borders, the BBC probably won’t be very interesting. We are proud that millions of Americans come to us each week and each month, wanting to understand what’s going on in the world and America’s relationship with it. You can argue that there’s not much more important than that right now, and hopefully that’s a reason why we’re seeing our audiences grow!